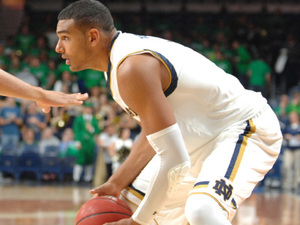 LASER FOCUS The Irish will try to build on their ACC Championship and Elite Eight appearance.

Soon the seats will be filled and students’ cheers will echo throughout the arena, but on this October day the only noise in the Purcell Pavilion accompanies images flashing across the video screen.

But not too many people need reminding of last season.

No one has forgotten the 32 wins from last season or the 28 days of March Madness excitement. The players remember vividly the triumphs of upending Duke three times and the heartbreak of falling short against Kentucky.

Head coach Mike Brey says, “There’s a pressure on this group after last year, and that’s a good thing. There’s pressure of ‘wow, we have got to deliver again.’”

Following a dismal 6-12 record in their first year in the conference, Notre Dame captured the ACC championship. The expectations are extremely high this year from fans and the team alike.

“We want to get back to the same place, but we have to take it one game at a time,” senior captain and forward Zach Auguste says. “Our primary goal right now is getting an ACC championship.”

As the Irish open the regular season against St. Francis (PA) on Nov. 13, the 2015-2016 team will have to forget some of what happened last year and forge on to create their own identity behind the leadership of captains Demetrius Jackson, Austin Burgett and Zach Auguste.

Jackson and Auguste both played key roles for the Irish last season and will be relied upon again. Their leadership will be extremely important on the court, setting the tone for the rest of the team.

Burgett has been on the verge of breaking out his entire career, but untimely injuries have precluded his success for the Irish.

Yet neither a lack of playing time nor injury woes discourage the 6’9” forward.

“We have six guys in our spring workouts, and we are poor. And [Burgett’s] the one getting the other five guys together to three on three defensive work all of April and into early May before exams. And I’ll never forget that about him,” Brey says.

Notre Dame will also look to juniors Steve Vasturia and V.J. Beachem to capitalize on their experience from last March and step up to fill the void left by Jerian Grant and Pat Connaughton. Both juniors played substantial minutes last season and Vasturia proved quite clutch in the tournament.

Neither is fazed by the added responsibility. Beachem especially credits his preparedness to learning from Grant and Connaughton.

“Watching them at the next level has been great, just thinking I went up against them every day for two years,” Beachem says. “Going against two pros every day, you can only get better from that.”

Beachem will have to assume a similar mentor role along with his new starting job. Freshmen Rex Pflueger, Matt Ryan and Elijah Burns will follow the example of Beachem and the other upperclassmen to fit into the team’s goals.

Early match-ups at home and in the Advocare Invitational will give the freshmen and the team as a whole a chance to establish consistency in the early portion of the season.

The Irish will look to build off of last year’s success and continue the program’s home-court winning tradition against key opponents. Virginia Tech, Louisville, Miami and preseason No. 1 North Carolina will all travel to the JACC to test the Irish.

Brey and his bunch are geared up to add a whole new set of highlights to that pregame video and maybe even make their own run to greatness. See you in March.