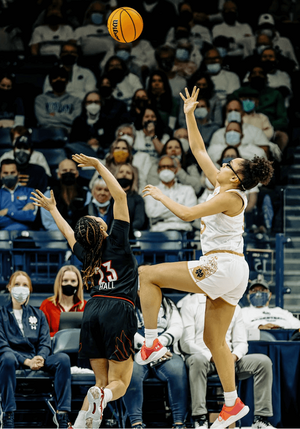 A Step Forward: A Rocky Road to the NCAA Tournament

Confidence in the Notre Dame men’s basketball program was low heading into the 2021-2022 season. An entire class of students graduated without seeing the Irish play in an NCAA Tournament game, marking the longest drought of Mike Brey’s career. However, the senior-laden team successfully ended that drought this year, reaching the NCAA Tournament for the first time since 2017.

A weak non-conference schedule has plagued the Irish over the past few seasons. That was not the case this year, as they took part in the Maui Invitational, hosted Kentucky, traveled to Illinois, and played Indiana on a neutral floor in Indianapolis.

The Maui Invitational featured an opportunity for the Irish to pick up quality wins early in the season. The last time Notre Dame played in the tournament, in 2017, they took home the trophy with a win over Wichita State. Capturing the hardware was not to be this trip, as the Irish dropped their first game to Saint Mary’s in a low scoring affair, 62-59. Unfortunately, this meant that their next game in the tournament would be Division II Chaminade, a game that would not even count as a win on their resume because it was not against a Division I opponent. Notre Dame won handily, 90-64.

The win over Chaminade led to a final matchup against Texas A&M. Winning this game would have made the Maui trip, while not perfect, a successful endeavor overall. Notre Dame seemed to control the game throughout the first half and the beginning of the second, amassing a 14-point lead with just under 17 minutes left in regulation. However, Texas A&M exposed holes in the Irish offense’s ball-handling ability with a stifling press, leading to a six-point defeat. The Maui Invitational proved a wasted early-season opportunity.

This disappointment was followed by a 10-point loss to Illinois that was not nearly as close as the final margin indicated. The only bright spot in that game was the emergence of star freshman Blake Wesley, who paced the team with 24 points. However, these early season failures left Notre Dame desperate for an impressive, resume-building win. That opportunity presented itself on Dec. 12 when No. 10 Kentucky visited Purcell Pavilion. The Irish came out ready to play and kept the game close at halftime, only trailing by two. The game swung back and forth for the majority of the second half. Then, with time running out and the score tied, freshman Blake Wesley delivered in the clutch, nailing a free throw line jumper with 13 seconds to go that gave the Irish a two-point edge. Stellar defending from Cormac Ryan forced a Kentucky miss, and elated students stormed the court at the final buzzer. This much-needed win provided a glimmer of hope for the Irish, even after they lost to Indiana a week later in their final notable non-conference matchup.

After a lackluster showing in non-conference play, the Irish needed to make noise in the ACC. Preseason polls pinned the Irish to finish eighth in the conference. In a typical year, this may have been good enough to earn them a tournament berth. However, this year was far from exceptional for the ACC, as powerhouses such as North Carolina and Virginia faltered and usually strong teams such as Syracuse and Florida State struggled to maintain any consistency.

The Irish season reached its low point in the first game of the conference schedule at Boston College. The Irish looked uncompetitive and were demolished 73-57. A team with as much experience as the Irish should never have looked that outmatched, much less by a team at the bottom of the ACC. This loss left many questions about this Irish team and whether it could muster any momentum to even be average in the ACC. Notre Dame’s already small margin for error was now razor-thin.

The Irish responded to this adversity by winning seven of their next eight conference matchups to improve to 7-2 in the conference. Duke then visited Purcell as the only team ahead of the Irish in the ACC standings. This game had all the markings of a potential season-changer. Sure, they had won seven of eight, but they had done so against the bottom half of the ACC. Duke was the one team above the rest, and beating them could cement Notre Dame’s turnaround and help them get past their early season woes.

The stands were full for Coach K’s final visit to Purcell. Unfortunately, the moment proved too big for this Irish team, who could only muster 14 points in the first half, and whimpered out of their home gym with a 57-43 loss. Losing to Duke is nothing to be ashamed of; however, once again one would expect a team with this much experience to go out and give Duke a fight.

The loss was reminiscent of the early season loss at Boston College where the Irish were outmatched from the tip. And just like after that game, the Irish responded by going on a run, this time of five straight victories. After splitting their final four games, the Irish finished with a 15-5 conference record and in second place in the ACC, only a game behind league-winners Duke.

But, an early loss to Virginia Tech in the quarterfinals of the ACC Tournament, combined with bid stealers making runs in various other leagues left Notre Dame nervous about their selection to the NCAA Tournament. However, they were selected as a member of the Last Four In, capping an imperfect but strong season that saw the team return to the tournament for the first time since 2017.

Next year is an intriguing one for the Irish. Notre Dame graduates seven players this year; however, all but Paul Atikinson could return because of the extra year of eligibility given for COVID-19. Who decides to return will determine how successful this Irish team can be next season.

The most important question will be whether or not Blake Wesley decides to enter the NBA Draft. Mock drafts currently have Wesley being drafted anywhere from a late lottery pick to a fringe first rounder. If Wesley decides to leave, the Irish lose the explosive playmaking ability he put on full display this season. It would certainly be a blow to the Irish if he decided not to return, and he would become the first one-and-done in the Mike Brey era.

Next, seniors need to be addressed. Dane Goodwin has already said he is likely to come back for another year. Nate Laszewski and Prentiss Hubb could as well. Who takes advantage of the extra year of eligibility will largely determine where the program will have holes that they need younger players to fill next season. With more departures, players that did not get much time this season, such as J.R. Konieczny, Elijah Taylor and Matt Zona, will be needed to make an impact.

Finally, the recruiting class for next year is one of the more exciting classes Brey has put together in recent memory. It features J.J Starling, Brey’s highest ranked recruit ever at No. 17 on the ESPN 100. Starling is an extremely athletic combo guard that can and will be expected to make an impact right away. If Wesley decides to stay at Notre Dame for another year, the pair could produce a deadly backcourt combination.

Top 100 power forward Ven-Allen Lubin and center Don Campbell round out the recruiting class. Lubin has a chance to contribute right away, while Campbell is more likely to be Brey’s typical recruit that needs to grow and develop before producing his junior and senior years.

Ultimately, the Irish successfully took a step forward this year, and the future looks bright. Obtaining an impressive recruiting class and reaching the NCAA tournament for the first time since 2017 brings light to a program that has struggled over the past three seasons. The ACC will certainly be stronger next season, and it is up to Mike Brey and the rest of the coaching staff to continue to bring this team back to the heights it experienced with back-to-back Elite Eights in 2015 and 2016.