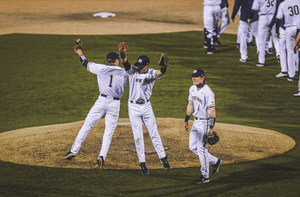 Between 2016 and 2019, Notre Dame baseball finished a combined 101-119 and failed to reach the NCAA tournament, crack the top 25 in the national rankings or have a winning season.

Then, Link Jarrett was hired as the 21st head coach in team history — after seven seasons at the helm of UNC-Greensboro — the summer before the 2020 season. Since then, the Irish have experienced a total resurgence.

Since Jarrett took over, Notre Dame baseball is 31-10 overall and is currently ranked as high as No. 6 in the national polls, their highest ranking since May 2004. Out of the six Division I baseball polls, Notre Dame is ranked in the top 10 in three of them, and their lowest ranking is No. 14 in the country.

This season, the Irish (20-8, 18-8 ACC) are the only team in the ACC not to have lost a series, and their eight conference series wins thus far are the most in a season for the team since 2006. Notre Dame was picked to finish last out of seven teams in the ACC’s Atlantic division each of the past two seasons, and 13th out of 14 teams total going into the 2021 season.

The matchups against then-No. 6 Louisville and then-No. 14 Georgia Tech earlier this season were the first ever top-15 matchups in Frank Eck Stadium history. The stadium first opened back in 1994.

Though the Irish have been revitalized across the board, their fielding as a team has taken an especially extraordinary leap under Jarrett. In 2019, Notre Dame ranked 203rd nationally in fielding percentage. As of midway through the 2021 season, Notre Dame’s .988 team fielding percentage leads the nation.

Through the team’s first 28 games, senior first baseman Niko Kavadas has been nothing short of spectacular. The former Penn High student leads the team with 15 HR and 36 RBI. His 0.52 home runs per game lead all of the NCAA, and his .859 slugging percentage and .489 on-base percentage both rank 2nd in the ACC. Kavadas has been named a 2021 D1 Baseball midseason All-American, and is on the midseason watch lists for the Golden Spikes Award that goes to the nation’s best overall player.

The Irish pitching staff has been similarly impressive, posting a 3.96 team ERA and .239 opponent batting average, which both rank second in the ACC.

With three ACC series and 12 total games left to play, Notre Dame baseball will hope to continue to replicate the success they’ve had since Jarrett took over and get back to the NCAA tournament for the first time since 2015.