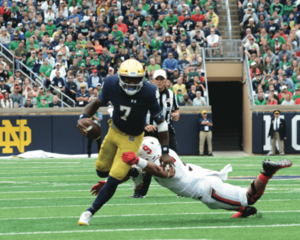 After a spectacular victory over the Wolverines, the Irish were determined to win another home game. This time, their objective was to protect The House that Rockne Built against the Ball State Cardinals. Since the Irish had never played the Cardinals, the game was bound to be historic. The fact that both teams had won their season opener in advance of their week two meeting contributed to the rising excitement.

Fortunately for the Irish fans, Notre Dame was victorious once again. Jafar Armstrong, Tony Jones Jr. and Justin Yoon all scored against the Cardinals and helped the Irish to a 24-16 victory. In addition, junior safety Jalen Elliott intercepted two passes from Cardinals quarterback Riley Neal, providing more opportunities for the Irish to score. Towards the end of the game, Irish linebacker Drue Tranquill recovered the ball during an onside kick attempt by the Cardinals to secure the home victory.

Despite a strong performance from the Irish defense, the Cardinals managed to lose by only eight points. For starters, Ball State caused the Notre Dame offense to stall during the majority of the first quarter and part of the second quarter tight defense. The Irish marched 74 yards down the field in five plays, including a one-yard touchdown run by Armstrong on their opening drive. On the following four drives, however, Notre Dame punted twice, missed a field goal and had a turnover on downs.

Notre Dame entered the locker room at halftime leading 14-6. On their first drive of the second half, senior wide receiver Miles Boykin had back- to-back first down receptions to help set up first-and-goal at the Ball State 1-yard line. Jones Jr. punched it in, and the Irish lead grew to 21-6. Despite the Cardinals scoring 10 points in the fourth quarter, the Irish held on to the lead to remain undefeated.

With two wins and zero losses, the Irish started looking ahead to their third home game, feeling as though the team still had room to grow. During the postgame interview, Wimbush stated that his “feeling was not a good one after the game,” emphasizing how “we clearly didn’t play to our standard today.” He rated his own performance poorly and expressed that he has “got to be better.” Head coach Brian Kelly also shared that “we need to coach better and prepare the football team better.” At the same time, he expressed his happiness towards winning another game and disagreed with Wimbush’s outlook towards the game, emphasizing, “you can never apologize for winning because winning is hard.”

Although the win was not the prettiest for Notre Dame, several Irish players reached personal milestones. Elliott marked his career highs in interceptions (two) and tackles (seven). Jones Jr. recorded the longest rush of his collegiate career after scampering 31 yards to the end zone to score a second touchdown for the Irish. The win also marked Jones Jr.’s first career game with multiple rushing touchdowns. Yoon, through his successful 46- yard field goal attempt, moved into fourth place in Notre Dame’s list of career scoring leaders with 287 points. Boykin recorded his career high in receiving yards during a single game with 119. Finally, Wimbush recorded his career high in passing yards with 297.

Overall, the game was enjoyable and emotional at times for both the players and the fans. The travel to campus and Notre Dame Stadium was exciting for many Cardinals fans, since it was the first time in college football history that the Cardinals faced the Irish. As the Cardinals played with a spirited effort against the Irish, their loss exhibited resolve and an ability to compete with a traditional powerhouse. For Notre Dame, the win fueled its determination to protect its house for the third time, where they

Irish hoped to be victorious against the Vanderbilt Commodores.