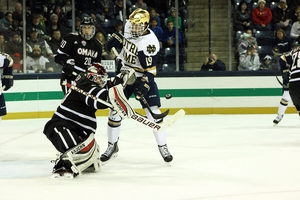 To kick off the 2017-2018 season, the Notre Dame hockey team is coming off an impressive run to the 2017 Frozen Four, the program’s third Frozen Four appearance in the previous 10 seasons. Led this year by senior captain Jake Evans, as well as alternate captains Jordan Gross, Andrew Oglevie and Luke Ripley, the Fighting Irish began the regular season against Alabama Huntsville on Oct. 6-7.

In their season opener, the Irish posted a 5-3 win. Evans led Notre Dame’s efforts with two goals and an assist. The next night, Dylan St. Cyr, freshman goaltender, stopped all 34 shots he faced in his Irish debut to help propel the team to a dominant 4-0 shutout.

In a press conference following the win Coach Jeff Jackson noted, “We knew he was a good goaltender. He won the World U18 Championships last year. He’s a very intelligent goaltender. He knows how big he his, and he uses it to his advantage … He’s in position aggressively, but he’s in control.”

In their next series, Notre Dame hockey welcomed the top-ranked Denver Pioneers to Compton for a 2017 Frozen Four rematch. In the first game of the series, the Irish and Pioneers battled to a 2-2 overtime tie. Evans and Oglevie each tallied their third goals of the season. St. Cyr was the standout of the game with 46 saves in goal, including four crucial stops on a late Denver power play. The next night, however, Notre Dame suffered its first loss of the season to the Pioneers in a 4-2 decision. Denver got off to a 2-0 lead in the first period, followed by a scoreless second. In the third, Cam Morrison and Jordan Gross each tallied a goal to tie the game 2-2. Their efforts were not enough against Denver’s strong offense, however, which was quick to answer with two more goals. Cale Morris recorded 33 saves for the Irish in goal.

Coach Jackson explained the goaltender situation in a press conference before the Sacred Heart series: “I’m okay with [Morris and St. Cyr] playing back-to-back [in goal] for us for the time being. Dylan’s had a little bit more success, but Cale’s made some really big saves in key moments in the game.”

Notre Dame suffered their second loss on Oct. 19 to the Sacred Heart Pioneers 6-4. Although the Irish led 3-2 after two periods, Sacred Heart gained offensive momentum scoring four goals in the third to defeat Notre Dame. The Fighting Irish got their revenge by winning the second game of the series 3-1. Joe Wegwerth led Notre Dame’s attack with a pair of goals, and Dawson Cook added a third in the victory. Morris also got his second career win, tallying 24 saves with a .960 save percentage.

Notre Dame Hockey closed out its eight-game homestand with a series against the Omaha Mavericks on Oct. 26-27. In their first game, the Irish started off slow as Omaha gained a 5-1 lead. Notre Dame rallied back with goals from Cal Burke, Andrew Peeke and Gross. However, the Irish eventually fell 6-4 to the Mavericks.

“We did some good things, but we didn’t do them soon enough,” Coach Jackson said. “We didn’t play with that urgency in the early stages of the game, and that’s something we have to resolve.”

In the final game of the series, Notre Dame learned from their previous loss and posted a 5-4 victory over Omaha, led by two goals from freshman forward Colin Theisen. Jack Jenkins, Cam Morrison and Gross also added points for the Irish. Gross also reached 100 career points with an assist on Theisen’s second goal of the night.

In a press conference following the win, Coach Jackson stated, “I thought we competed harder. We had a really good spell there in the second period and changed the game. We played the way we want to play.”

Notre Dame officially opened Big Ten conference play with their first road games of the season against Ohio State at Value City Arena on Nov. 3-4. The Irish swept the Buckeyes, winning 4-1 on Friday and 3-2 on Saturday.

Coach Jackson explained his team’s approach to the media saying, “We are starting conference play, so every weekend is going to be tough. There’s no easy outs in the Big Ten. Our first road trip is going to be a big challenge for us. The big thing is going to be to … play with a competitive edge and do a bit better of a job at playing the way we are supposed to.”

He added, “When we get everybody back and the goaltenders start getting some confidence playing at this level, then the potential is unlimited. We just have to keep on getting better every day.”