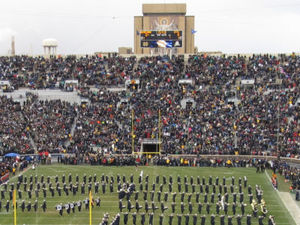 Much has transpired, both positively and negatively, at Notre Dame since Knute Rockne led the football team to three national championships and five undefeated seasons. What hasn’t changed is the importance of football, and athletics as a whole, to the fabric of the university.

How is all this money generated and how specifically does the athletic department spend it? Under the Equity in Athletics Disclosure Act of 1994, schools with athletic programs must provide much of this information in an annual EADA report available to the public by Oct. 15 of each year.

According to the EADA report, this revenue generally comes from ticket sales, student activity fees, guarantees, contributions from alumni and others, post-season compensation, concessions, radio and television, sponsorships and sports camps.

The athletic department’s expenses include salaries and benefits, scholarships, operating expenses, travel, equipment, recruiting expenses, and guarantees, among others.

“If you look at Division I schools and about 120 that have football, a little more than half make money on football,” Affleck-Graves says. “If you’re a reasonably big program, football does generate excess revenues. Everybody uses those excess revenues to subsidize the other sports. Athletic departments by and large either break even or lose money. We are in the fortunate position at Notre Dame where our athletic department runs at a surplus.”

Although the men’s basketball program generated the second largest revenue amount among the Notre Dame sports, the football program was the only sport to actually make a profit. All other men’s teams generated combined revenue of $3,621,014 with expenses of $14,461,172.

Women’s basketball was the lead revenue producer among women’s sports. Women’s sports as a whole generated 2.7 percent of the athletic program’s total revenue.

The remaining 21.4 percent of revenue for the Notre Dame athletic department during the 2013-14 reporting year came from the category “Not Allocated By Gender.” This category, which pertains to revenue generated by the athletic program but not by a specific team, includes the revenue generated by Notre Dame’s 10-year deal with Under Armour, which is worth about $90 million.

The athletic program’s operating expenses include costs of travel, lodging, meals, uniforms, equipment and officials. Athletically related student aid accounted for approximately 20 percent of expenses, and a small portion of expenses went toward recruiting expenditures, which include costs involving transportation, meals and lodging for recruits.

Nevala explained that although the university’s spending on athletics might seem high to some people, it is in line with that of other institutions when one considers the percentage of students that participate in athletics.

“It’s a big sum of money, but it’s relatively small in the grand scheme of things,” Nevala says. “There was a study a few years ago. If you looked at all schools across Division I athletics, I think three percent of what was being spent by those schools was being spent on athletics, but four percent of their student bodies participated in athletics. Annually athletics here is typically 8-10 percent of the university’s budget. Notre Dame has approximately 8,000 undergraduates, and we have about 700 students that are generally varsity athletes, so it’s a pretty similar percentage.”

Although the athletic department serves as a revenue generator for Notre Dame, Nevala said the department’s central goal is to embody the five core values of Notre Dame athletics: community, education, excellence, faith and tradition.

Among the interconnected factors of Notre Dame’s financial landscape — the endowment, tuition, faculty and staff, and facilities — some people likely view athletics as an outlier regarding its connection to education. But the university appears to disagree, viewing athletics at its core not only as a revenue generator and an integral aspect of the university’s culture, but also as a means to further the education of the many students that participate in them.

“We believe that participating in athletics is educational in its own right,” Nevala says. “You learn in the laboratory of your practice field, ice arena, or track, or whatever it might be. You’re learning some pretty important things along the way, and not only about your sport.”

Awareness of this educational aspect of athletics is as long lasting as the university’s athletic tradition of excellence. Knute Rockne himself put it well, saying, “Four years of football are calculated to breed in the average man more of the ingredients of success in life than almost any academic course he takes.”