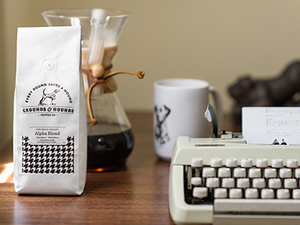 Karcher’s own experience with dog adoption sparked the idea.

“I looked off to the side of the road and saw a pop-up dog adoption happening. One super-malnourished, skinny dog crawled on my lap, and that’s when I knew this dog was coming home with me,” Karcher says. “I started thinking about how I could use my background in business and consumer behavior to do something that improves the landscape of animal rescue long-term in a sustainable manner.”

Karcher played baseball at Florida International University until he blew out his elbow multiple times. He transitioned to a career in marketing and began his work in the wine and spirits industry in Los Angeles before beginning graduate school at Notre Dame to earn his MBA.

He first coined Grounds and Hounds in 2010 and stored the name in an iPhone note. Karcher’s dream was to grow the company through a “brick and mortar” coffee shop, but he has had to use time and capital to get his idea off the ground. He’s shifted his focus to retail distribution.

“We started bootstrapping in the truest sense,” Karcher says. “I was selling things on eBay to pay fees and get trademarks passed. We were just trying to scratch by to get it off the ground. We had no real idea about what might happen.”

Grounds and Hounds has donated over $15,000 to its rescue shelter partners with 15 to 30 percent growth each month since the original launch. The company’s distribution outreach has also advanced from Michiana, to California, Oregon and New York.

“The most rewarding part of the job is to bring the community together,” Karcher says. “Animal lovers and advocates and people passionate about coffee really helped. When I launched, it was really embraced by the animal community at first. They helped us get this going.”

The Notre Dame community has also supported the effort to grow the Grounds and Hounds idea.

Notre Dame has communicated with alumni channels to build awareness of the brand and the university has made Grounds and Hounds an integral part of its football game day coffee sales. Grounds and Hounds was Notre Dame’s exclusive coffee provider at the Shamrock Series in Indianapolis and in VIP tents on Football Fridays. Karcher believes that Grounds and Hounds can be embraced by Notre Dame as a brand of its own.

“The Notre Dame community got really involved with it,” Karcher says. “They’ve helped us expand our message from the animal rescue community to the general community supporting ND initiatives. It ties in really well with what the school represents and ‘ask more of business.’ We try to keep that at the core of what we do.”

Karcher hasn’t been alone in his pursuit of his dream. His initial investor was Chris Stevens, a Mendoza professor who was an original founder of Keurig. Stevens applied his knowledge of the coffee business to help lift the idea off the ground.

“Importantly, even in the very competitive and cluttered coffee category, Jordan was able to create a business model that will resonate with those who love great coffee, responsibly grown and who love animals,” Stevens says. “I am really proud of Jordan and his team…They are making a difference... and amazingly, he is doing it while he is still working hard on his MBA.”

Grounds and Hounds has been introduced in Whole Foods South Bend to raise money for South Bend shelters. Karcher says the challenge will be expanding in retail stores to continue their upward trajectory in addressing the cause. Ultimately, Karcher wants Grounds and Hounds to be incorporated in the daily lives of animal and coffee lovers.

This story appeared in the October 9, 2014 issue of Scholastic.