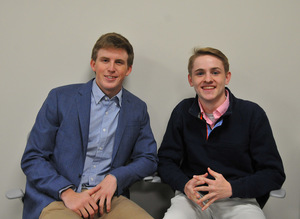 Two fresh faces joined the race to be the next leaders of the student body: Zahm House freshmen Andrew Gannon and Mark Moran.

In the spirit of a longstanding tradition, the Gannon and Moran ticket offers the perspective of youth, levity and Zahm culture. For years, a pair of Zahm freshmen has attempted to run for executive positions in student government, without success.

In their own words, Gannon and Moran say: “I don’t want to call us pioneers because that’s not who we are, but I think,” Gannon started until Moran interrupted, “Pilgrims? No, no, that’s worse.”

The two freshmen are the first Zahm ticket to garner the 700 signatures necessary to appear on the ballot since Sean Campbell and George McCabe in 2014.

“That year, they got enough to force a runoff, and on a campaigning technicality they could have become president but turned it down,” campaign manager JP Bruno says.

A few of their ideas include the implementation of fireworks to alert campus to the start of parietals, the abolishment of student government and a Saint Mary’s study abroad program in Zahm House.

These ideas came from a crowd-sourced student survey that the duo started. “I mean, if we were elected, that’s our job. We might as well learn those interests now,” Moran says.

Gannon says, “This has been a very student-oriented campaign. Obviously we are both freshmen. We kind of came in with the expectation this would be a campaign…”

While some of what they say is outlandish and the “Zahm Party” has often been treated as a sideshow, the young Gannon and Moran presented themselves with more depth than their predecessors.

“It’s a tradition probably a lot people of look down on, but we were actually told by someone in Zahm, that you guys are far too reputable to being doing this for Zahm,” Moran says.

“So I think it shows we are an extension of the tradition, we love the tradition. And obviously we are a part of it and we love Zahm with all our hearts and minds and souls, but we probably are a bit of a step back toward seriousness.”

In addition to considering ideas from fellow students, the campaign demonstrates passion for dorm life and campus resources. For one thing, they’d like to extend the sense of community they have experienced in their time in Zahm to the entire campus.

Another issue on which they will focus: disparity in dorm quality. They cited the difference between Sorin College and Dunne Hall as an example. “I don’t think there are any bats infesting Dunne,” Moran says.

Gannon and Moran definitely take a non-traditional approach: Their unorthodox ideas, their lack of experience and the manner in which they are conducting their campaign set them apart.

The pair sat outside the dining halls for three days in bathing suits in order to garner enough signatures to be eligible for the ballot.

“We want to show we are all in for having a good time because that’s where we’re from and how we’ve been brought up in the first semester, but I would say we are bit different from past candidates,” Gannon says.

“From a younger perspective, we feel as though since we are the ones who are going to be at the university for the next three or so years, we should have a say in how it’s going to be run.”

“Obviously it would benefit everyone, but we just think that the change we would create would be most beneficial to our class,” Moran says. “We want to control our own destiny, essentially,” Gannon says.

While their crowd-sourced platform does include other infeasible planks such as starting all interhall hockey games with a human sacrifice (“Building Community the Ancient Roman Way”) and that all students should be required to take a class on “Donkey Kong: War” in place of the Moreau First Experience course, there are also more reasonable ideas.

The duo aspires to make all dorms handicap accessible, to encourage more widespread use of gender neutral pronouns more widespread on campus and to lobby for a Chik-Fil-A in the Duncan Student Center.

Gannon and Moran do not just write anything off. They see the humor, but also find an opportunity in every suggestion.

“Obviously a lot of these are, again, are outlandish, but I think what these represent — obviously we can’t replace Moreau with a class with “Donkey Kong: War,” but it shows that there’s discontent with the way that’s been working.

“So even though we can’t implement a class about video games, it shows there’s work to be done,” Gannon says. “And I guess one way of going about that would be finding more avenues for real talk with the people at the top who are in charge of the First Year of Studies, who are in charge of Res Life, and getting into a dialogue about how both sides of this university can end up getting what they want.”

Though unconventional, the Gannon/Moran ticket exudes an undeniable energy and once the laughs die down, a few people might see the potential in these two brave (fresh)men.