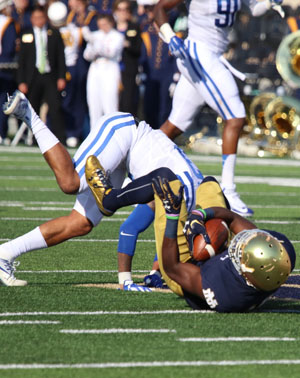 Just as many on social media anxiously look toward a bright future in 2017 and attempt to put 2016 (what they refer to as “the worst year ever”) in the rearview mirror, Notre Dame football is in the midst of a very similar catharsis.

For only the eighth time in 110 seasons, and the second since 1964, the Irish finished a season with fewer than five wins, closing at 4-8. Of the six instances before 1964, one was the 1918 season when Notre Dame only played six games (finishing with a 3-1-2 record). The other five occurred between 1933 and 1963 when the team’s schedule was either nine or ten games long.

So what exactly went wrong in 2016? For one, the starting quarterback was not firmly decided until the second week of the regular season. Throughout fall camp, both redshirt sophomore DeShone Kizer and redshirt junior Malik Zaire were given equal opportunity to compete for the starting job, while sophomore quarterback Brandon Wimbush redshirted to preserve a year of eligibility. This battle continued until the team’s season-opening loss at Texas, after which Kelly officially gave the nod to Kizer.

Touted as a likely first-round pick if he decided to forgo his senior season and declare for the NFL Draft after the 2016 campaign, Kizer played well in his first five games, averaging 313 passing yards and nearly three touchdowns per game. He made a strong case for his candidacy to start against Texas, completing 15 of 24 passes for 215 yards and five touchdowns, while adding 77 rushing yards (13 carries) and a rushing touchdown to account for all six Irish touchdowns in the 50-47 loss.

Over the final six games (Irish were 2-4 in that stretch) Kizer averaged just 217.3 passing yards. For a handful of drives against Stanford on Oct. 15, Kelly benched Kizer in favor of Zaire after the former threw his second interception of the game, but Zaire and the team as a whole struggled mightily to sustain any offense in a 17-10 defeat.

While the offense had its moments, the defense struggled across the entire season, especially in key situations at the end of games. They allowed an average of nearly 380 yards of offense and 28 points per game, holding only four teams (Nevada, NC State, Stanford and Army) under 27 points.

A year ago, the Irish relied on a combination of linebackers Jaylon Smith and Joe Schmidt, defensive linemen Romeo Okwara and Sheldon Day to anchor the defense. With those four no longer on the team, Notre Dame attempted to patch together the holes left by those key playmakers. Senior linebacker James Onwualu along with senior cornerback Cole Luke, junior safety Drue Tranquill and junior linebacker Nyles Morgan did a fair job, with Morgan registering a team-leading 94 tackles and Luke intercepting two passes to bring his career total to eight.

Not all the blame can (nor should) be put on the players, though. There have been polarizing discussions about the Irish coaches and their effectiveness. Fans witnessed speculation about whether the university should replace head coach Brian Kelly. They cheered when defensive coordinator Brian VanGorder was let go after the team’s loss to Duke. And they watched offensive coordinator Mike Sanford leave to take the head coaching position at Western Kentucky.

The staff is undergoing a heavy dose of turnover and anticipation. New coaches on Kelly’s staff next season include offensive coordinator Chip Long and defensive coordinator Steve Elko, who left the same positions at Memphis and Wake Forest, respectively. Additionally, Matt Balis will serve as Director of Football Performance, replacing Paul Longo, who has been alongside Kelly for 13 seasons spanning time at Central Michigan, Cincinnati and Notre Dame.

The majority of the starters on both offense and defense returning for the Irish, and the young team will bring to the 2017 campaign not only added experience, but also and more importantly, a fire to perform and improve upon last season’s results. With the additions to the coaching staff, a more veteran roster, seven home games and a renovated Notre Dame Stadium (with the Campus Crossroads project set to be finished this fall). There are bright spots ahead for the Irish program. Expectations will undoubtedly be sky-high, but this team has the talent and the leadership to wake up the echoes and ensure that a culture of winning returns to South Bend.