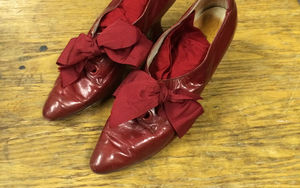 Imagine a place that allows you to instantly step back into any decade of the past. You can be a dazzling flapper girl from the 1920s or a dapper ad man from the 1960s. That is exactly the kind of place Deborah Mayers has created with South Bend School District’s Casaday Costume Collection.

Mayers is a professional costumer and is the sole person in charge of the costume collection, which contains over 76,000 different pieces.

The collection itself dates back to the 1970s, when James Lewis Casaday started it.  Casaday was a drama teacher for the South Bend School District. He would help create the costumes for various plays and productions in the district — and he was crafty about it. 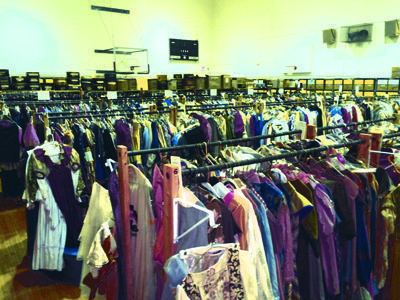 “If he found a paper plate that he particularly liked, he would make it a part of a crown,” Mayers says.

Over time, Casaday accumulated a substantial collection of clothing ranging from true vintage pieces from the 1880s to contemporary costumes fashioned by hand. “He got these things from family, friends, attics and basements,” Mayers says. But such a large collection was never his real dream.

“It wasn’t his goal to amass this collection,” Mayers says. “This would blow his mind.”

Though Casaday has since passed away, his beautiful collection continues to grow. Today the collection is housed in Marquette Elementary’s old school building. The decadent clothing hangs on racks lining the hallways, filling six different classrooms and the entire space of the gym.

Anyone is welcome to browse the costumes and rent them, but by appointment only. The rental fee for a costume is typically $20. 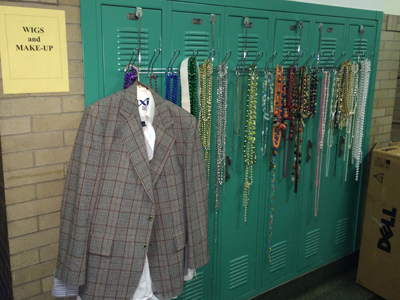 When they come, Mayers greets visitors with a warm smile, likely wearing a shiny silver tiara made of pipe cleaners. She guides visitors around strands of beaded necklaces and past stacks of cobbled shoes. They will dip in and out of the 1940s before heading to the intricate fabrics of the 1890s waistcoats. She seems to be able to dress people in any outfit they want from the last 150 years.

Well, maybe not any outfit.

“If it hasn’t been in a play, I probably don’t have it,” Mayers says.

Mayers even alters and rents out wedding dresses from the collection. She admits that she does rent out the costumes for Halloween purposes as well, but only if visitors come with at least three specific ideas in mind first. No aimless browsing allowed. With 76,000 costumes to choose from, a Halloween shopper would become far too overwhelmed.

Mayers says she averages about four appointments per day. Her usual business comes from regional theaters, local universities, church production directors, the Center for History, the South Bend Civic Center and South Bend school children. Visitors also come from as far as Hartford, Mich. and Fort Wayne, Ind. The collection has made quite a name for itself. 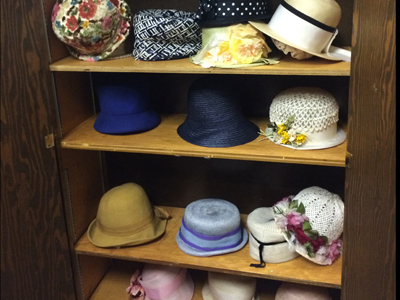 But it is not all fun and dress up games for Mayers. Because the clothes are so delicate and dated, they require constant repairs. She says she has a rack of seven years worth of mending to do in order to fix tears, beading, relining and more.

Mayers is also quite handy at repurposing her costumes. For instance, if someone comes in wanting several 1920s flapper dresses worthy of the musical “Chicago,” Mayers may not have enough in stock.

But not to worry. She simply takes a few drop-waist dresses from the 1960s, adds pleats and beads to create a 1920s look.

Because the costumes are constantly changing, it is very difficult to manage the inventory of the collection. “It’s going to take probably five years to barcode everything. And even then it’s still ongoing, it’s never done,” she says.

Despite its size, the Casaday Costume Collection has no permanent home. The South Bend School District has a fine arts fund that supports the collection’s operating costs, but not its housing costs. In the summer, for a short period, it will be moved from the old Marquette Elementary building to the LaSalle Academy.

No matter where the collection is relocated next, Mayers will be waiting with a smile and crown for anyone who wants to see it.