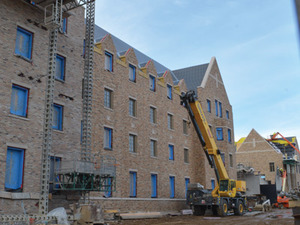 At Notre Dame, residence halls each bear a unique cultural identity. This identity is tied to a particular building but signifies much more — it consists of traditions and values that make the dorm and its community truly distinct.

But beginning in fall 2016, the dynamic of residence halls on campus will shift. Two new dorms, a men’s hall and women’s hall, are being constructed on the northeast side of campus and are expected to open for residents at the start of next semester. The new dorms will help to alleviate overcrowding, particularly in men’s dorms, and facilitate faster renovations of the older dorms.

As part of the residential and renovation plans, Pangborn Hall will no longer be the home of the Pangborn community. Beginning this fall, Pangborn’s current residents will move to the new women’s dorm, where they will be integrated with other women from around campus who will fill the remaining spots through the interhall transfer application process.

Pangborn Hall then will be used as a “swing dorm,” housing the residents of halls that are undergoing renovations, so that renovation can happen year-round — not only during the summers. Pangborn was chosen as the “swing dorm” because it is not a “good candidate for the further investment of a major renovation,” Associate Vice President for Residential Life Heather Rakoczy Russell says. She says that, though Pangborn is “functional and safe,” the ceiling dimensions, HVAC and plumbing systems prevent modernization.

Rakoczy Russell explains that the plan to shift dorm communities is consistent with the university’s residential philosophy.

“Whenever possible, we strive to ensure that established communities of people remain together, even if their physical location changes during a renovation,” she says. “This philosophy honors both the personal relationships that have been formed within an existing community and Notre Dame’s continued commitment to our residential communities.”

Sr. Mary Donnelly, current rector of Pangborn Hall who will move to the new dorm, says not all of Pangborn’s residents were initially happy about the news. Donnelly herself has called Pangborn home for the past eight years. Despite the nostalgia of leaving Pangborn, Donnelly says she is excited to move to the new dorm and continue to deepen the Pangborn community. But she also recognized that this is not just a transplant of Pangborn into a new building.

“I am committed to welcoming all the various gifts, talents, perspectives of all the women who will call the new hall their home,” Donnelly says. “This is not about simply picking up the residents of Pangborn and placing us in a new hall where others will join us and take on the character of Pangborn. My hope is that the new hall will truly be home for all the women who reside there, a place where we can take the best of each hall’s understanding and expression of community and create something new.”

The selection process will be intentionally designed to achieve diversity in the new dorm across as many dimensions as possible.

Rev. Matthew Kuczora, C.S.C., current Carroll Hall rector, will become the rector of the new men’s dorm. He too expressed sadness and excitement at the prospect of moving from his current dorm to create a new community.

“I am excited to get over there to get to meet the guys who are going to be in the hall and to find creative ways, together with them, to bring together traditions from probably every dorm on campus to create a new tradition. And in ways that recognize where they come from, but still give us freedom to try new stuff as well,” Kuczora says.

The residential landscape of Notre Dame is changing, but many see it as a chance to improve upon existing community and show the university’s commitment to maintaining its unique residential life.

“It shows how important this is for our community,” Kuczora says. “We want to keep growing, keep building and to provide the best we can for our students and still maintain that close community. So as far as my new dorm goes, I think that says a lot about the future in a great way. This is here to stay.”