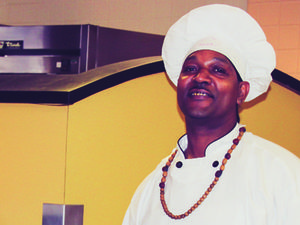 Tim Beard — otherwise known as “The Grill-Master” — serves omelets at the dining hall. He cracks jokes with coworkers and students alike. He calls out “next!” so loudly that it snaps students out of their early morning grogginess. His outgoing personality can be intimidating for some, but when students get their omelets, served with Beard’s signature “pound” fist bump, Beard demonstrates what he feels his work is really about.

“I do it for y’all,” Beard says. But before Beard worked at Notre Dame, he wasn’t always smiling.

When he attended Riley High School, Beard says, he ran with the wrong crowd and started to make decisions that he would soon regret. He began a long and suffocating relationship with drugs and only a short time later met a girl and had his first child at 17.

It wasn’t until 15 years ago that Beard, who has lived in South Bend his whole life, says he turned his life around. Beard put an end to his drug abuse and decided to find a job. About three years later, Beard was still struggling to support his three children working as a cook at Ponderosa Steakhouse. But one morning, he received a phone call from an old friend.

He told Beard to apply for a job at his current place of employment: Notre Dame. Beard hesitated at first. He thought at the time it was just going to be another job; he’d be making eggs in a different building for different people. It wasn’t until Beard started the job and interacted with the students that he realized something about this place was different for him.

“What kept me driving is y’all,” he says. “The smiles, the motivation, the laughter, just to get to know y’all. Notre Dame is special, man…all these people from all these different places, and you hear their stories and you just look at ‘em like, wow. I mean this is a dream job, man. Seeing these kids every day…I love waking up to do what I do with y’all.”

He says he gives advice to kids every day. “Wake up and do what you do. Everybody’s not guaranteed anything, you understand what I’m saying?”

One day Beard saw a freshman girl in South Dining Hall getting run over by crowds of upperclassmen. He called her over to the omelet station and told her, “The next time you come in here, you better be running people over the way they’re running you over, and the next thing you know — shoom! Next time she came in she had that confidence.”

Beard says that’s what he does. He sees the kids who are at the bottom and raises them back up. He tells them to keep going and never stop, because that’s what he is doing and good things are happening as a result. 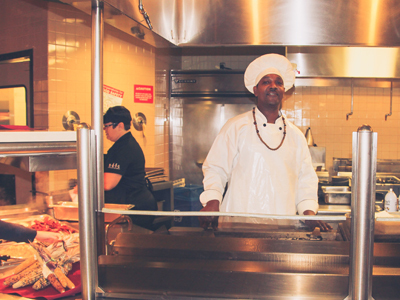 “I’m 48, and I’m not stopping. I’m getting my G.E.D. I’m working here. I’m going to go to culinary art school. I’m making a better life for my family and me. I don’t do drugs. I’m on a natural high, I guess. I’m on cloud nine all the time, and even my nieces and nephews ask, ‘How does he stay so hyped?’ And I’m just saying I don’t want to fall down because I lost so much, and I love all the kids too much to go down again.”

And the students respond to him. Beard says that he has formed more friendships and impacted more kids than he ever could have imagined,

“I got alumni coming back to see me. I got kid’s parents coming to see me….a cook! Me! They say ‘Oh I’m so glad you helped take care of me’… I did what? I didn’t know the impact I was having.”

Just as the students need the encouragement of a fist bump, sometimes Beard needs support too. Two years ago, Beard lost five loved ones in a year’s time: his father, grandmother, two uncles and his nephew. “In a time when I was really struggling to get back on, these people here at Notre Dame got me back on. The smiles got me back up, the laughs, the happiness, from the students and the good employees.”

As Beard searched the ceiling for the next word, his brow furrowed and his voice quivered. “This is a beautiful job, man. Life is beautiful, and it’s short. I learned that, and I love y’all.”