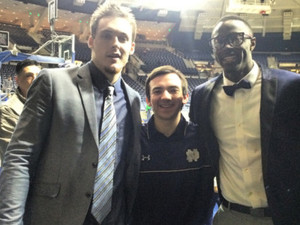 You may not know it but Mike Higgins helped the 2014-2015 Notre Dame basketball team to the school’s first Elite Eight in 36 years.

His name did not appear next to Grant and Connaughton in the box scores or on the roster, but that does not mean he was not an integral piece to the Irish’s success.

Higgins is not a student-athlete, but he is certainly much more than an ordinary student, returning for his second season as student-manager for the Fighting Irish men’s basketball team.

Like many students, Higgins wanted to attend Notre Dame from a young age, but his dream included larger plans.

Mike Higgins served as manager for the football, basketball, and baseball teams in high school, earning 10 varsity letters in the process.

A desire to continue working with sports formed, and when his high school coach introduced him to Notre Dame assistant coach Martin Inglesby as a sophomore, Higgins realized he wanted to join the Irish basketball program.

When he was accepted to Notre Dame in spring, 2014, Higgins contacted Inglesby again, and started working with the team once he arrived on campus in the fall.

His duties include arriving at practices early, spending upwards of eight hours with the team on game-days, and recording statistics.

Higgins’ duties as a student manager require sacrifice, he admitted. Higgins devotes over 20 hours of his week to team activities and sometimes even more on especially busy weeks.

That sacrifice may even include putting his body on the line.

Higgins spends a lot his time under the hoop, fielding rebounds and feeding the players. “Got to watch out, there’s a lot of flying basketballs going around,” he says of the chaos of the shoot-around.

“I’ve gotten hit in the head and I got my nail bent back last year,” Higgins says.

Though Higgins does not always see the glory of being a part of a top-tier Division I basketball program, he pours everything he has into the team, and because of that, he ended up in the trainer’s office.

“That was bad. I guess my thumbnail was a little too long and the shot just clipped it, and it ripped it back, like halfway off, and it was sticking up in the air,” Higgins says. “But Skip Meyer, our trainer, fixed me up. He wrapped it up, gave me some stuff to deal with it.”

None of it is a burden to Higgins. His eyes glisten and his voice seeps with excitement when he talks about the team, a welcoming group that Higgins describes as, “just guys who play basketball.” He could talk for hours about sitting around the locker-room with the guys or late-night rebounding sessions and the conversations that follow.

But a smile and a certain sort of energy overtakes Higgins whenever last year’s team is mentioned. He straightened up and leaned forward to say, “It was a ride. It was awesome, absolutely awesome.”

He talked his way through the entire season, from Minnesota-Duluth to Kentucky, commenting on his favorite moments on the road to the Elite Eight.

“A lot of people said with the ACC championship, with the 30 plus wins that they would think that this was, that this had been one of the best teams in Notre Dame history,” Higgins says.

Though Higgins will never show up in the stat sheet, he certainly contributed to last year’s success.

“It was really fun to be a part of that my first year and I don’t know, maybe I brought a little mojo,” he says.

As Higgins broke down the prospects for this year’s team, he offered one final note: “we only used yellow Gatorade last year for games, so we’ll have to see what they pick this year.”

One thing is certain. Mike Higgins will be ready to stock whatever color he needs.