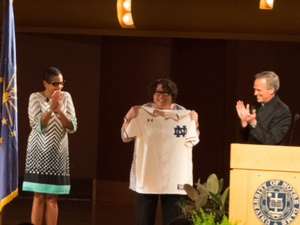 Supreme Court Justice Sonia Sotomayor has a special “human heart connection,” a quality that allows her to “connect to people of all walks of life … with dignity and respect,” Ann Claire Williams, a circuit judge for the U.S. Court of Appeals, says of her close friend. Sotomayor, the first Latino Supreme Court justice as well as the third appointed female justice, abandoned her typical black robes for more comfortable black slacks, a black shirt and a grey cardigan at a speaking event on Sept. 2 in Leighton Concert Hall.

It’s only appropriate that Sotomayor, interviewed by NBC correspondent Anne Thompson, described her influence within the Supreme Court as “a part of that conversation,” since that was what witnessing Sotomayor’s talk felt like – a casual, warm conversation. Sotomayor joked often and chose to walk around the auditorium during the question-and-answer period that followed Thompson’s interview, making sure that all members of the audience were able to see her up close.

Sotomayor answered pre-selected questions as she walked. How does she keep her personal preferences from swaying her decisions? “It’s very hard to live with yourself if you’re making decisions like God … The greatest injustice is when a judge lets their personal predilections determine a case,” she says.

What can society learn from both the friendships and the discord between today’s justices?  “That ability to accept difference for its own value is something that the rest of the country would do well to achieve,” Sotomayor says.

Does she believe that the next justices should be people of color? “Not necessarily. I think the greater ill on the Supreme Court today is the lack of diversity in profession,” she says. “We don’t have diversity of religion on our court. These are deficits equal to race and gender.”

And finally, Thompson asked Sotomayor one last question – “What do you think your legacy will be?” Sotomayor thought, then answered with certitude.

“My legacy if I have one — I can’t predict what it’ll be on justice — but what I can pick is how I spend my life as a justice. I’m here because you are important to me … so to the extent I can inspire you to do something more, that’s my legacy to you.”