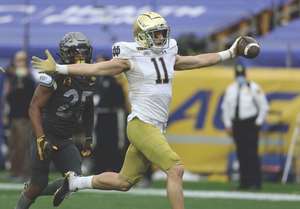 The coronavirus pandemic has made scouting and player evaluations even more difficult this year than in years past, so the upcoming NFL Draft will be filled with heightened uncertainty. After a second trip in three years to the College Football Playoff, the Fighting Irish will graduate a large swath of the talent that has sustained their success over the past few seasons.  Many of those graduating are hoping to hear their names called this spring at the NFL Draft.

Linebacker Jeremiah Owusu-Koramoah was a star on the Irish defense this season and is the highest rated Irish player entering the upcoming draft. He is one of seven Irish players accepting invitations to the Senior Bowl, and he’s likely to be selected on the draft’s opening night.  He led the defense in forced and recovered fumbles, and was second on the team in tackles with 61 over the course of the season. The team that drafts him will receive a hybrid playmaker that can both drop back into coverage and make plays in the box.

Notre Dame is perennially known for its stellar offensive line, and this year is no different. The Irish graduate four of their five starting linemen from this year, and all four (Liam Eichenberg, Aaron Banks, Tommy Kraemer and Robert Hainsey) are likely to hear their names called during the draft. They will aim to add to the collection of successful NFL linemen that Notre Dame has produced.

Ade Ogundeji and Daelin Hayes, two captains of the Irish squad, are defensive linemen who should hear their names called in Cleveland. Ogundeji was a force up front for the Irish defense, leading the team with seven sacks. He will likely be selected in one of the middle rounds. Hayes had three sacks on the year and delivered one of the most memorable plays of the season: his crushing sack on third down against Clemson in double overtime. Although Hayes demonstrated his elite athleticism throughout his career at Notre Dame, his injury history may harm his draft position.

Ian Book, Notre Dame’s all-time-winningest quarterback, also hopes to find success in the pros. The Irish QB finished ninth in Heisman voting and has accepted an invitation to the Senior Bowl where he can attempt to increase his draft stock. He could hear his name called later in the draft, but Book’s more likely scenario is a team picking him up as an undrafted free agent.

Junior tight end Tommy Tremble also declared for the draft, leaving three years of remaining eligibility behind. Tremble, who saw his receiving role diminish slightly with the emergence of Michael Mayer this season, is a superb blocker who relishes the more physical part of his position. He will hope to add to the ranks of successful Irish tight ends in the NFL through both his blocking and pass-catching capabilities. Senior tight end Brock Wright also declared for the draft.

Finally, Ben Skowronek is another Irish player who accepted a Senior Bowl invite. The 6-foot-3 grad transfer posted 439 yards receiving and five touchdowns for the Irish this year. His size and athleticism could earn him a selection late in this year’s draft.

The unusual circumstances surrounding this college football season will lead to a more unique draft process, and talent evaluation will be more difficult than ever. The success of the Irish, combined with completing a full season, should provide a boon to the Irish players hoping to carve out careers as professional athletes