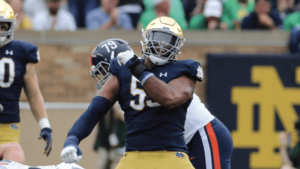 After a College Football Playoff berth last season, the hopes for Fighting Irish fans were sky-high with the return of so much talent. Despite not returning to the College Football Playoff this season, the year ended on a good note and could get even better for certain Irish upperclassmen looking to hear their names called in Las Vegas this April at the NFL Draft. Each of these players has the potential to find themselves on an NFL roster next fall, regardless of whether or not they are drafted.

The trend continues for tall receivers entering their senior season at Notre Dame as Claypool realized his potential and became a dominant receiver for the team this year. Eclipsing the 1,000 yard mark in the Camping World Bowl against Iowa State, Claypool showed an elite catch radius at Notre Dame and an affinity for making the big play.

His length, leadership and strong hands make him the optimal NFL receiver in modern football. He refuses to go down after making the catch and comes down with just about every ball thrown his way, leading to a team high 13 touchdowns this season. In a loaded receiver class this year, Claypool might have to wait a little longer than normal to see his name come off the board, but whoever picks him is getting a flat-out game changer.

Gilman, the fan-favorite out of Hawaii, has a nose for the football and has never been scared to deliver a crushing hit. While Gilman may not have the straight-line speed to guard NFL receivers as a safety, his effort and passion for the game are unmatched and give him the potential to find his way onto the field.

After racking up 95 total tackles last season, Gilman followed it up with 74 more tackles and an interception before announcing his decision to forgo his final season of eligibility in order to pursue his NFL dreams. Whichever NFL team decides to take a risk on the Hawaiian will be getting an extremely smart player who is willing to outwork anyone in front of him.

Kareem, a 6-foot-4, 265-pound defensive end from Detroit, Michigan, made up an integral part of what many believed to be the best defensive line in college football heading into the 2019 season. With the potential to be drafted after last season, he solidified his position as a Day 2 selection with a solid senior season.

A ferocious pass-rusher from the edge, Kareem possesses the power and the finesse to shed blocks and disrupt any quarterback. Although there have been concerns about his durability due to many minor injuries, he tied for the team lead in both sacks and forced fumbles with 5.5 and 3 respectively.

Perhaps no one increased their draft stock more this season than Kmet, the junior from Lake Barrington, Il, who is yet another great tight end to have played for Brian Kelly and the Fighting Irish. Despite missing the first few games of the season due to a collarbone injury suffered in preseason, Kmet still finished second on the team in receptions, yards, and touchdowns.

While there is certainly room for improvement in his blocking, Kmet possesses the height, speed and strength to make him an elite tight end at the next level. Speaking of a return for his senior season throughout the majority of the year, Kmet could not pass up the opportunity

Okwara, Notre Dame’s top draft prospect this season, was sidelined for the remainder of the season after fracturing his left fibula in the Duke game. Despite the injury, his potential alone may be enough to hear his name called toward the tail end of the first round.

The 6-foot-5, 250-pounder has extreme length and spent the entirety of the last offseason working on finishing tackles when he has quarterbacks wrapped up. The effort last summer paid off in the form of 6 tackles for loss and 4 sacks in just 9 games played. If everything goes according to plan with his recovery, there is little doubt that Okwara has many years in the NFL ahead of him.

In what many projected to be a breakout season for senior cornerback Troy Pride Jr., there were some question marks that emerged about his coverage skills. While it was certainly an up-and-down season for Pride, he played his best football towards the end of the season and greatly increased his draft stock with a shutdown performance against Iowa State.

The 5-foot-11 senior out of South Carolina has elite speed that will allow him to test well at the combine, further increasing his draft stock to the point where he might have the widest range of any Notre Dame player in this class. With 40 tackles and an interception on the season, Pride certainly flashed the potential many had discussed in the preseason.

While these Notre Dame players have a great chance to be suited up for an NFL team next season, there are a few others looking to make a name for themselves before the draft and in preseason camps. Many of them will be undrafted free agents, but they will still have a chance to play in the NFL. Tony Jones Jr., Chris Finke, Asmar Bilal, Jamir Jones and Jalen Elliot all had productive careers for the Fighting Irish, and hopefully each receives a chance to prove themselves at the next level.