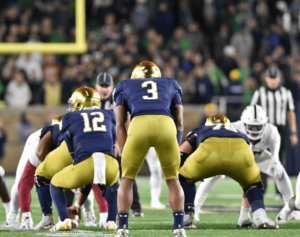 The Notre Dame Fighting Irish will begin their 2019 season on the road for the first time since 2016, when the Irish took on Texas in Austin. The Irish will travel to Kentucky for a Labor Day showdown with the Louisville Cardinals. Louisville finished the 2018 season 2-10, firing its head coach Bobby Petrino in the middle of the season along with defensive coordinator Brian VanGorder, who was last fired from Notre Dame in 2016.

Notre Dame opens its seven-game home schedule with a visit from the New Mexico Lobos and ex-Notre Dame head coach Bob Davie, before traveling to Athens, Georgia for a high-stakes showdown with the Georgia Bulldogs. Then the Irish face three straight home games with Virginia, Bowling Green and USC all coming to Notre Dame Stadium before the bye week. After the break, the Irish travel north to take on Michigan in the Big House in Ann Arbor.

November opens with a rematch against Virginia Tech, followed by a trip to Durham, North Carolina to face the Duke Blue Devils. Two games round out the home slate, with Navy and Boston College fighting for the chance to reclaim two rivalry trophies. The season ends with the California trip, this time to Palo Alto to take on the Stanford Cardinal.

Notre Dame will return a large portion of its defensive talent, including most of the secondary — except Julian Love — as well as defensive linemen Daelin Hayes, Julian Okwara, Khalid Kareem and Kurt Hinish. The linebacker position will be of question next year, with Drue Tranquill and Te’von Coney graduating.

On offense, quarterback Ian Book, as well as running backs Jafar Armstrong, Avery Davis, and Tony Jones Jr. will return. Chase Claypool and Michael Young Jr. will be back as well. At tight end, Alizé Mack and Nic Weishar will graduate, but Cole Kmet and Brock Wright will return to give the Irish experience. The offensive line will graduate Sam Mustipher and Alex Bars, but Liam Eichenberg, Aaron Banks, Tommy Kraemer and Robert Hainsey will return to maintain a solid blocking core.

The Irish signed all 21 of their verbal commits on early signing day in December, giving the Irish a class ranked in the top 15 in the country to bolster the breadth of experience they already have. Expectations will be high in Brian Kelly’s 10th season as Notre Dame football head coach, especially after an impressive 12-0 regular season and first ever playoff appearance.