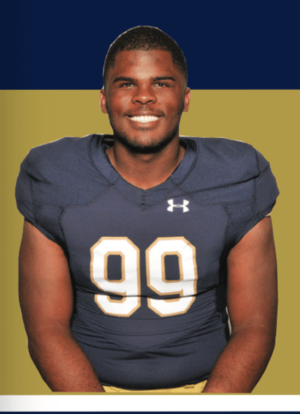 Before the 2018 college football season, it was clear that some of Notre Dame’s dominant upperclassmen would be lucky enough to hear their names called in April at the 2019 NFL Draft in Nashville.

Yet, what most didn’t know was just how talented these young men were. After a perfect 12-0 season and the team’s first ever berth in the College Football Playoff, the stock has exponentially risen for a number of players on the roster. As the spring draws near, it is becoming more and more evident that several of Notre Dame’s stars will be suiting up on Sundays come next fall.

Tillery, a 6-foot-7, 305-pound defensive lineman from Shreveport, Louisiana and a Sports Illustrated first-team All-American, is Notre Dame’s top draft prospect. A disruptive pass-rusher as well as a capable run-stopper, his best attribute is his length.

Despite his height and often-clumsy footwork, Tillery covers ground quickly with his long strides and is sound at shedding blocks. The senior recorded a team-high eight sacks and three forced fumbles to go along with 30 tackles this season to prove his worth to NFL scouts.

A Jim Thorpe Award finalist and a Sports Illustrated first-team All-American, cornerback Julian Love has been in the spotlight for the Irish since his breakout freshman season.

Touted as one of the best in his position in the 2019 draft
class, Love has excellent feet to excel in man coverage and the discipline and patience when in zone. Love is Notre Dame’s career leader in pass break-ups — accumulating 15 this season alone — and also tallied three fumble recoveries. He should be an early-round pick.

The three-time Mackey Award watch-list selection had an impressive season for the Irish, hauling in 34 passes for 349 yards and three touchdowns, finishing fourth on the team in receiving. A second-team Sports Illustrated All-American, Mack has the size (6- foot-5, 245 pounds) and ability to be a mid-round pick in this year’s draft.

While two ACL tears have plagued Tranquill’s draft stock in the eyes of some, his toughness and physicality will never be questioned. A two-time captain for the Irish and the Wuerffel Trophy winner, Tranquill has great coverage ability and instincts. Tranquill’s athleticism, discipline and explosiveness are his strongest attributes. As a good tackler with great coverage skills and blitz abilities, Tranquill will be a late-round steal for whoever is smart enough to pick him up.

Williams improved his stock the most out of any Irish player this season, which is saying something. After a career laden with baggage both on and off the field — he missed the first four games of this season for a violation of team rules — Williams proved his talent and worth this season. Williams led the team with 941 rushing yards and 12 touchdowns despite missing four games. He also had four 100-yard rushing games, including a 202- yard effort with two TDs against Florida State. After a breakout season, Williams could see himself going anywhere between rounds three and five.

At 6-foot-1 and 240 pounds, Coney has the frame of a modern- day NFL linebacker. His blazing speed allows him to cover sideline to sideline, and his ability to convert speed into power is unmatched. Coney has above-average run-stopping abilities and is a consistent wrap-up tackler who is feared in the open field.

After a breakout junior season, Coney toyed with the idea of entering last year’s draft but returned for his senior season to raise his draft stock. He did just that, finishing the season with 99 total tackles, 3.5 sacks, an interception and a fumble recovery.

Senior Miles Boykin has underrated NFL potential. The team’s leading receiver with 803 receiving yards on 54 catches and eight touchdowns, Boykin was the first Irish receiver to catch a TD in six straight games since Will Fuller in 2014. At 6-foot-4 with strong hands and exceptional downfield blocking abilities, Boykin is an optimal NFL receiver.

Notre Dame’s all-time leading scorer, Yoon finished the season 16 for 20 with a long of 48 yards, and solidified himself as Mr. Reliable for the Irish. The senior is the sixth-ranked kicker in the nation, and he holds 26 Notre Dame kicking records.