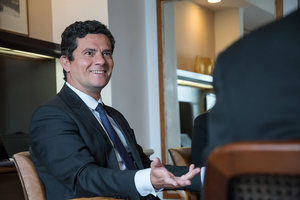 Sérgio Moro, a Brazilian federal judge and leader of Brazil’s anti-corruption movement, will receive an honorary degree and serve as Notre Dame’s 2018 Commencement Speaker next May.

Judge Moro received the Notre Dame Award, given to “women and men whose life and deeds have shown exemplary dedication to the ideals for which the University stands,” on Oct. 2 at a ceremony in São Paulo. He was presented with the award by the university president, Rev. John I. Jenkins, C.S.C., who commended Moro for his “courageous efforts to preserve the nation’s integrity through his steadfast, unbiased application of the law.’”

Moro, 45, was raised in Maringá, a city in the state of Paraná. He received a law degree from Maringá State University and a doctorate degree from the Federal University of Paraná, and later studied at Harvard Law School. He was appointed to his current position as a federal judge in the southern city of Curitiba in 1996, and has since gained international recognition for sentencing powerful Brazilian business leaders and politicians on corruption charges.

Fr. Jenkins referred to Moro as a “shining example of someone who lives out the values we seek to inspire in our students” in an Oct. 30 press release.

“He is engaged in nothing less than the preservation of his nation’s integrity though his steadfast, unbiased application of the law,” Fr. Jenkins said at the Notre Dame Award ceremony in early October. “By addressing the pernicious problems of public corruption in a judicious but diligent way, Dr. Moro has made a marked difference for all Brazilians and for humankind at large in our universal thirst for justice.”

“I am pleased he has accepted our invitation and know that he will offer valuable observations to our Class of 2018,” Jenkins said in that same release.