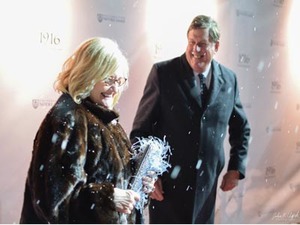 “Today the world knows the true story of that daring endeavor … the men who died on that fatal Easter week were the last martyrs of Ireland. They were patriots, high-minded and chivalrous … and filled with desire to set their country once more among the free nations of the earth.” These were the words written in the March 15, 1919 issue of Scholastic, dedicated to the fallen leaders of the Easter Rising of 1916.

At a school whose nickname is the Fighting Irish, it comes as no surprise that the University of Notre Dame has a special connection with Ireland. Beyond the usual athletic fanfare, the name “Fighting Irish” developed from the fact that many students during the early twentieth century came from Irish American families. The prominent Irish background of many students led to increased attention to the news of the 1916 Easter Rising in Dublin, an event that inspired freedom movements throughout the world.

The Easter Rising refers to the events of Easter Monday, April 24, 1916, when Irish nationalists staged a rebellion in Dublin in order to free the country from British rule. The rebels seized prominent buildings in Dublin and declared independence for Ireland, but were suppressed within a week. More than 2,000 people died or were injured during the struggle, many of them civilians, women and children.

A new documentary entitled 1916: The Irish Rebellion shines new light on the historical event that just celebrated its 100-year anniversary. The film, narrated by Irish actor Liam Neeson, was screened to the public on Notre Dame’s campus at the 2016 National Meeting for the American Conference for Irish Studies. Briona Nic Dhiarmada, the Thomas J. and Kathleen M. O’Donnell Chair of Irish Language and Literature, is the film’s writer and co-producer.

“We spent five to six years working on this, and I always felt that we could do this,” Nic Dhiarmada said to the conference audience in the Leighton Concert Hall at DeBartolo Performing Arts Center on March 31.

The documentary was filmed in seven countries and features rare photos and film footage, along with interviews from experts from a number of prominent universities around the world, including Oxford University, New York University and Trinity College Dublin.

The film restores complexity to the traditional narrative of the event, highlighting the role of women and the civilian casualties that resulted from the rebellion. The details of America’s involvement in the event and the campaign for a free Irish Republic are also the focus of much of the film.

“Americans helped finance the Easter Rising, and perhaps even more significantly, what Americans had achieved in winning their own independence … served as an example for what many people in Ireland wanted to pursue for themselves,” Bob Schmuhl, Notre Dame professor and author of the new book Ireland’s Exiled Children: America in the Easter Rising, says. “The Proclamation of 1916 [the document that announced the sovereign Irish Republic] acknowledges support from Ireland’s ‘exiled children in America.’”

The events in Dublin caught and kept the attention of many Notre Dame students and South Bend residents. On April 29, 1916, the day the Irish nationalists surrendered, Scholastic published an editorial titled, “The Rift in the Empire.” In its March 1919 issue, the Scholastic staff devoted almost 12 pages to articles and poems celebrating the Easter Rising’s leaders and the cause of an independent Irish Republic.

“Given Notre Dame’s strong connection to Ireland, it was important for the university to recognize this defining moment for the Irish and for Irish America,” Schmuhl says.

The importance of the Easter rising extended far beyond the borders of Ireland and the campus of Notre Dame. The pushback against the British Empire inspired other struggles in British-owned territories around the world, loosening the grip of British rule that had been powerful and dominant in the nineteenth and early twentieth centuries.

On March 16, the Irish government hosted a one hundred year celebration of the rebellion of Easter 1916, a date that is generally regarded as having led to Ireland’s independence six years later. 1916: The Irish Rebellion was made a centerpiece of the event, and was streamed not only in Dublin, but also to 24 Irish embassies and consulates around the world.

More than 250 public television stations around the country and stations from around the world, including Australia, Spain, Finland and others, will carry the Notre Dame-produced documentary, spreading awareness of the battle that sparked Irish patriotism and independence movements around the world.

Nic Dhiarmada said at the screening on March 31, “At the end of the day, the history is about the people, and the people make history.”