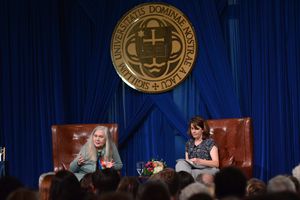 Marilynne Robinson, author of the Pulitzer Prize-winning novel “Gilead,” joined students and faculty on Sept. 21 for a conversation about religion, writing and ethics. The conversation was part of Notre Dame’s 2018-19 forum, titled Catholic Artistic Heritage: Bringing Forth Treasures Old and New. To begin, Robinson spoke of her lifelong interest in theology and of how her college roommate inadvertently motivated her career by telling her she “didn’t have the nerve” to take a creative writing class. Naturally, she signed up for one immediately.

Fortunate and talented enough to have received hearty encouragement, she followed that vocation through graduate school and beyond, writing everything from novels to nonfiction. Her advice to students discerning their own vocations was deceptively simple: “Never let people tell you there’s something you can’t do. They’re always wrong.”

When discussing her own philosophy as an author and in life, Robinson emphasized the importance of individualism. This was not, she explained, some misguided idea of exclusion, selfishness or lack of empathy, but rather a recognition of all people as “highly distinctive emotional ecologies” who express themselves beautifully and particularly. Individualism also requires that each person be responsive to his or her conscience and responsible for dealing with what God presents. Speaking specifically about God, Robinson said “there is no reason in my experience to keep people from being absolutely candid about what they believe.” This philosophy has inspired her explicitly Christian work.

The forum concluded with questions from a panel of four students, and then from the audience at large, which asked Robinson to discuss Biblical parallels in her novels, conceptions of masculinity and her famous advocacy for the words of John Calvin. From Calvin, Robinson drew the same profound conclusions of individualism: “The most useful standard of behavior I have ever heard of [is that] it has to be true that God is equally invested in your enemy.” This reinforced the necessity of care for the “other” and anyone on the margins of society.

Robinson also responded to the fear of failure in society’s ability to write about religious mystery or beauty, reminding the audience that “the mere fact of failure is no reason for being discouraged, not at all.” Though society will never perfectly encapsulate those concepts, she says, its attempts still prove “the great jewels of human civilization.”