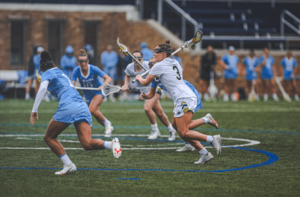 In 2020, the Notre Dame women’s lacrosse team started the season 7-0 and found themselves ranked No. 2 in the country after defeating Vanderbilt on March 11, but soon came the announcement of the cancellation of NCAA spring sports. The team felt they were robbed of a chance of not just an appearance in championship weekend but also the national championship. So when the NCAA announced the granting of an extra year of eligibility, 2020 senior captains Savannah Buchanan, Samantha Lynch and Kathleen Roe all took the opportunity for one last run at a national championship. The three were also joined by fellow seniors Kelly Donnelly, Erin McBride, Jessi Masinko, and Katie Enrietto in returning for another season.

At the start of the 2021 season, the Irish found themselves ranked in the same spot they ended the 2020 season: No. 2. In the first two games of the season, the women dominated both Vanderbilt and Robert Morris, winning each game by double-digits. Lynch scored nine goals in those first two games and has not missed a beat since, putting up 27 goals in the first nine games. Additional offensive firepower has come from sophomores Madison Ahern, Jackie Wolak, Kasey Choma and senior Maddie Howe, all of whom have over 25 points on the season.

After the 2-0 start to the season, the Irish dropped back-to-back tight contests on the road to Syracuse, who is currently ranked No. 3 in the country. The Irish were then able to rattle off four straight wins, three of which were against ranked opponents. They defeated No. 19 Louisville at home and both No. 9 Duke and No. 7 Virginia on the road. That four-game winning streak set the Irish up for a top-five matchup with undefeated and top-ranked North Carolina at Arlotta Stadium.

The Irish found themselves trailing 5-1 early in the first half to the Tar Heels before storming back to take a 7-6 lead at the half behind two goals from Wolak, including a buzzer-beater to end the half. The second half was a defensive battle with senior goalie Bridget Deehan standing strong in the net and totaling 14 saves in the afternoon. The Tar Heels and Irish would trade scores before junior Madison Mote tied the game at 10 with eight minutes remaining. North Carolina would take the lead right back with just over seven minutes to play and the score stayed that way until the final whistle.

The team then had to turn around and travel to Chestnut Hill for two games against No. 5 Boston College, the first of which took place on April 15. The Irish played  without Lynch, and the emotional effects from a nail-biter with North Carolina were evident early as the Irish found themselves trailing 6-0 in the first half. The Irish were never able to overcome this deficit and fell 19-11. The second matchup was much of the same and the Irish were defeated 18-12. After the weekend in Chestnut Hill, the Irish are 6-5 and in fifth in the ACC with two games remaining. The record is not telling of how good this Irish team may be, however, as four of their five losses were on the road and the three teams they lost to have a combined record of 36-2, with both of those losses coming to North Carolina. The polls understand this as well, as the Irish only dropped two spots to No. 6.

The last two regular-season matchups for the Irish are against Virginia Tech and Louisville, both of whom sit at the bottom of the ACC. It will be two games for the Irish to gain some much-needed momentum and get the offense humming after three straight losses to very tough competition. The ACC tournament will take place April 28 through May 2, and the Irish will most likely face Duke in the first round.