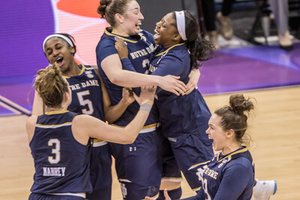 To paint a portrait of how tenacious Muffet McGraw’s 2017–2018 national champion squad was, one only has to look to the Hall of Fame coach’s remarks after the victorious championship game. “I didn’t think we’d have more ACL tears than losses,” she said. “I think it’s just an amazing accomplishment for this team and the resilience they’ve shown all year.”

Muffet McGraw fearlessly led the team through adversity to a national championship. It’s no wonder that she was named AP Coach of the Year.

Indeed, the conversation about the Irish’s remarkable season can’t truly begin without an examination of just how unlucky the team’s injury woes were. In last season’s tournament, star forward and incoming senior Brianna Turner tore her ACL. In the early days of this year, three of her teammates suffered the same fate: senior guard Mychal Johnson, freshman center Mikayla Vaughan and graduate transfer guard Lili Thompson.

To make matters worse, the Irish had one of the toughest schedules in the country and were set to face 11 preseason AP top-25 teams. The season looked daunting to say the least.

Down to an unprecedented seven scholarship players in late December, coach Muffet McGraw turned to walk-ons to fill out the roster for the first time since the 2010–2011 season. Initially, junior forward Maureen Butler and sophomore guard Kaitlin Cole joined the team; Cole became a key substitution player off the bench and saw important minutes in the NCAA tournament. Freshman guard Nicole Benz became the third such player to join the official squad later in the season.

Although the Irish were winning the majority of their games, save a dropped close contest against rival powerhouse Connecticut, the defense was not up to the standard of excellence that the Irish had come to expect in previous seasons. That fact was on full display on Jan. 11, when the suffered the program's worst loss in 16 years at the hands of Louisville. "We kept thinking, ‘Well, we're winning, so what’s the big deal?’” McGraw said after the game. “So, hopefully, it sent a message to them. Maybe it took being embarrassed on national TV.”

A week later, the turning point of the season occurred. In a game with No. 6 Tennessee, the Irish were down through the first three quarters. In the fourth, the offense and defense both clicked, as they erased a 23-pont deficit and completed a 37-point swing to win 84–70. It was the greatest comeback in program history, and the Irish had their swagger back.

A key component of the Irish’s resilience was the reinvention of their guards. With Thompson’s injury, the Irish were left with no point guards on the roster. Junior guard Marina Mabrey, sophomore guard Jackie Young and junior guard Arike Ogunbowale all spent time in the role; Mabrey would come to be entrusted with leading the nation’s No. 3 scoring offense. Of the modified role, Mabrey said, “As a two, you're thinking about scoring. Now I feel like I have to put myself second and think, 'OK, what does our team need?'"

The injuries also forced the spotlight on former role players, both new and old. Sophomore forward Jackie Young had performed admirably in a supporting role her first season, enough to earn a spot on the All-ACC Freshman team; this season, she became a starter that was leaned on every night. She responded by nearly doubling her scoring average (7.3 to 14.2), assists (47 to 117) and steals (27 to 48). Junior forward Jessica Shephard also fit ceaselessly into McGraw’s offense. Every player stepped up.

Perhaps no player took their game to a higher level than the woman whose name would be enshrined in college basketball lore by the end of the postseason. Ogunbowale became the most valuable player not only of the Irish but of the March Madness viewing public; her strong regular season predicated those honors.

In time for the postseason, the Irish had secured a No. 1 seed for tournament play; their chances of succeeding, however, were still in question. After dispatching Cal State Northridge in the first round to the tune of 99-81 (the largest point output in the program's tournament history), the Irish found themselves in a hard-fought battle with No. 9 seed Villanova. After going into halftime with the score tied at 45, the Irish found inspiration in senior forward Kathryn Westbeld's appearance despite rolling her ankle the game prior. In addition to 25 and 24 points for Shepard and Ogunbowale, respectively, Young notched a career-high of 24 points in the contest, impressing McGraw to such a degree that the 31-year Irish coach predicted of the star-in-the-making, "I think she's gonna be maybe the best to ever play here."

Next up for the Irish was a trip to Spokane to take on Texas A&M, a program that had spoiled the Irish's 2011 season by defeating the team in the championship game. After going down 37-24 late in the second quarter, the comeback came alive courtesy of a sharp-shooting Mabrey and Ogunbowale and the Irish prevailed 90-84. Their elite eight matchup against Oregon showed just how much this Irish team had grown in the past two months, as rock-solid defense in the second half culminated in an 84-74 victory that booked their ticket to the Final Four.

This formidable task did not dissuade the Irish. Notre Dame and UConn battled from start to finish. At the end of the first quarter, the Irish led by six. At halftime, UConn led by seven. For much of the third and fourth quarters, the teams were tied or separated by just a point. Thanks to a clutch shot on the left wing by Ogunbowale with 46 seconds left, the Irish expanded their lead to three. After two more free throws, by the junior, Notre Dame led 79-74 with 20 seconds left.

The team jumped for joy, as did their fans. The game seemed to be over. It wasn’t. UConn scored five points of their own and sent the game to overtime.

With eight seconds left in overtime and the game tied at 89, Ogunbowale grabbed the ball from Mabrey. She dribbled right, crossed to her left, and made one of the most memorable shots in tournament history. The Irish won 91-89 but weren’t done.

For any fan of this season's journey, the storyline of the championship game against Mississippi State could not have been more indicative of the Irish way. If they weren't underdogs against tournament darling Teaira McCowan and All-American Victoria Vivan, they certainly were after a measly three point output in the second quarter left them entering the half down 17-30. From there, Ogunbowale shook off a cold first half and began driving fearlessly to the basket to spur yet another Irish comeback. Combined with excellent play on McCowan from Shepard and must-have jump shots from Mabrey and Young late down the stretch, Notre Dame found itself tied at 58 with three seconds remaining. On a broken play, Ogunbowale received an inbounds pass and, falling out of bounds, shot and scored a three-pointer that instantly became the stuff of legend. The 15-point deficit erased by the team was the largest in the championship game's history, only adding to the lore.

Resilient is the adjective that best describes this Notre Dame team. The four ACL tears, the tough schedule, the banged-up starters: Those didn’t matter. Their resilience did, and the team’s name will hang from the Purcell Pavilion rafters because of it.