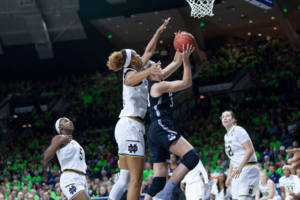 You all know the story. Last year, the Notre Dame women’s basketball team defied all odds by overcoming the loss of four players to season-ending injuries and winning the national championship.

As the celebrations died down and the attention turned to the 2018-19 season, Notre Dame looked forward to the next challenge — winning back-to-back national championships.

The odds favored the Irish. They entered the season ranked No. 1 in the AP Top 25, the first time in recent memory that they started ahead of UConn. Seniors Jessica Shepard, Marina Mabrey and Arike Ogunbowale, the stars of the 2017-18 season, looked to repeat their past success. Graduate student

Brianna Turner and sophomore Mikayla Vaughn hoped to return from their injuries stronger than ever.

When the season began on Nov. 9 versus Harvard, Notre Dame picked up right where it left off. Winning by double digits in each of their first five games, including against No. 15 DePaul, the Irish looked unstoppable.

Then in the final of the Vancouver Showcase on Nov. 24, head coach Muffet McGraw and her Irish faced their first real test of the year in No. 9 Oregon State. The Beavers led by as many as 14 points, but Notre Dame clawed back to win 91-81, thanks to junior guard Jackie Young’s 23 points.

Eight days later, Notre Dame faced UConn in the most highly anticipated game of the season. The No. 1 Irish (7-0) would face the No. 2 Huskies (6-0) at Purcell Pavilion in a rematch of their thrilling Final Four showdown in 2018. The two teams battled for the first three quarters, entering the final frame with UConn leading 65-59. In the fourth quarter, though, the Huskies pulled away to win 89-71.

The Irish dropped just one spot in the national rankings and looked to get back to their winning ways. They did just that. Notre Dame won five more non-conference matchups, including an 87-63 win at No. 19 Marquette.

Then came the next chapter of the 2018-19 season — conference play. Coming off a 15-1 conference record and a loss in the ACC tournament championship the year before, Notre Dame hoped to repeat its dominance and then some.

Starting with a pair of easy wins against Pitt and Georgia Tech, the Irish found themselves playing anotherNo. 1 vs. No. 2 game at home. Since UConn lost to Baylor, Notre Dame had moved back into the top spot, followed by the Louisville Cardinals.

Both of Notre Dame’s ACC losses in 2017-18 were to Louisville, including a 100-67 pummeling in the regular season. Additionally, the two teams and head coaches are not known to be very fond of each other. The Jan. 10 matchup served as a great opportunity for the Irish to get their revenge.

The first two quarters proved to be a defensive battle, as the Cardinals held Ogunbowale to just four points in the first half. Louisville led Notre Dame 35-33 at the break.

In the third quarter, the Irish exploded and took a 10-point lead. The Cardinals clawed back, but Ogunbowale, who scored 26 points in the second half and 30 on the night, helped secure an 82-68 victory.

“Both teams had the lead, both teams had to fight back. I was so proud of what we did. We saw a 14-point lead wither away and didn’t panic,” McGraw said following the game.

Notre Dame then beat Wake Forest, Virginia Tech and Boston College to remain perfect in conference play. A trip to Knoxville to face the Tennessee Volunteers proved to be a challenge for the three quarters, but the Irish continued their trend of dominant fourth quarters and won 77-62.

On Jan. 27, though, the UNC Tar Heels shocked the No. 1 Irish in Chapel Hill by a score of 78-73. Young missed the game with an injury, and the Tar Heels took advantage. The win was UNC’s first over Notre Dame since the Irish joined the ACC in 2013-14.

As the calendar turns to February and the madness draws closer, Notre Dame looks to regain its momentum going into the postseason and bring another banner back to South Bend.