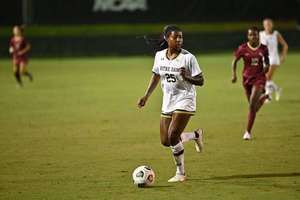 Last year, in his second season as the head coach of his alma mater, Nate Norman led the Fighting Irish women’s soccer team to an 11-8-2 overall record, as well as to the second round of the NCAA tournament for the first time since the 2015-2016 season.

The 2019 result proved to be a complete turnaround from the previous season which was the first losing season in the history of the Notre Dame women’s soccer program. That’s all to say the team took two giant steps forward last season and built momentum heading into the 2020 season.

Despite not having any practices, exhibition matches or team sessions over the course of last spring and this fall due to the effects of the coronavirus pandemic, Notre Dame returned a wealth of experienced talent ahead of this season, including those responsible for 93% of last year’s total offensive point production. Seniors Sammi Fisher and Eva Hurm, both of whom received 2019 Third Team All-ACC honors, are two of the most notable returners. Fisher led the 2019 team in goals (6), assists (5) and points (17), while Hurm was second in goals (5) and points (13).

Junior midfielder Luisa Delgado, who missed the entire 2018 season and the beginning of last due to injury, still managed to finish last season third on the team in goals (4) and points (12). Talented forwards Olivia Wingate and Kiki Van Zanten also returned to the Irish offensive attack. Further, junior Mattie Interian entered the 2020 season after appearing in eight games and amassing a 4-3 record as a starting goalkeeper during her sophomore campaign.

This season, the women’s team is playing an eight-game, conference-only schedule of four home and four away games. The top eight teams out of the 13 in the conference will advance to the ACC Championship held at WakeMed Soccer Park in early November. Notre Dame was ranked sixth out of that group of 13 in the preseason poll.

As of right now, Notre Dame has played four games and sits at 3-1. The Irish were routed in their season opener against the 2018 national champion Florida State Seminoles, who returned 15 of their total 21 players from last year’s team that advanced to the NCAA quarterfinals. The Irish looked flat on both sides of the ball and were shut out handily 5-0. Norman’s team rebounded with a 6-0 rout of their own against a weak Miami Hurricanes squad the next week. Van Zanten earned her first career hat trick while Fisher added a brace and Wingate added a goal of her own. The Irish earned two home victories against Boston College and Syracuse, winning each match 2-0.

With just an eight-game schedule against competition as stiff as that in the ACC, there’s no more room for another lopsided loss like that to Florida State. The Irish have both the talent and experience to make a serious run in the ACC this season, and they hope to build off their three-game win streak as they get set to host Wake Forest on Oct. 15.

The fifth-ranked men’s soccer team opened its season with a 1-2 record, beating Kentucky in a season-opening win before falling 3-1 to No. 4 Pitt and 2-1 to Louisville.

Notre Dame will play five more matches this fall — all against ACC opponents. Like the other fall sports under NCAA jurisdiction, the men’s soccer championship will be held in the spring.

Last year, Notre Dame finished with a 10-8-1 record in a season that ended with a 3-2 loss to Wright State in the first round of the NCAA Tournament in November. While this season differs without the championship at the end of the fall, there are still positive takeaways for Notre Dame after two matches.

Freshman Daniel Russo scored the game-winner against Kentucky with a header in the 62nd minute, then earned his first career start against Pitt. Senior goalkeeper Keagan McLaughlin didn’t allow a goal and tallied three saves against Kentucky. Senior Aiden McFadden provided the assist on both Irish goals so far this season, both of which came on corner kicks.

The Irish will have a chance to avenge their loss against Pitt when they face the Panthers on the road Oct. 30. Notre Dame will also play Louisville again, this time at home on Nov. 6.