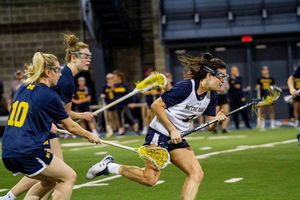 After an impressive 14-5 season and a loss in the second round of the women’s tournament, the women’s lacrosse team is looking to make a push to the Final Four, somewhere they haven’t yet been under current head coach Christine Halfpenny. The 14 wins in 2019 ties for the third most in program history. The Irish come in at No. 7 in Inside Lacrosse’s preseason top 20, and for good reason.

This year’s team is a combination of veteran leadership and young talent. The Irish return all but four players from last year’s team. This year’s freshman class was ranked as the No. 2 recruiting class, according to Inside Lacrosse, and includes the No. 1 and No. 2 recruits in the class, midfielder Kasey Choma and attacker Madison Ahern. Choma was named Inside Lacrosse High School Player of the Year this past year and will bring in a skill set that will make an instant impact on both sides of the field.

The Irish will be led by their 12 seniors, two of whom are graduate students. They also bring back their three leading scorers from 2019: Maddie Howe, Andie Aldave and Samantha Lynch. The three of them combined for 159 of the team’s 285 goals (55%) during the 2019 campaign. Aldave was named a First Team Preseason All-American by Inside Lacrosse and Howe was named to the Third Team. Aldave does not just make an impact on the offense, she was also the team leader in draw controls. Her 152 draw controls last year set a school record.

The defense also returns a great amount of talent including seven players who caused at least 15 turnovers last season. The Irish will have to replace All-American goalie, Sam Giacolone, who was one of the best in the country. Junior Bridget Deehan is expected to take over the starting role for the Irish. Last season, in her 150 minutes of playing time, she held a save percentage of 62%.

The team plays a very rigorous 16-game schedule which includes eight teams ranked in Inside Lacrosse’s preseason top 20, four of which are inside the top five. The first of these ranked opponents is No. 4 Northwestern on Feb. 14 in Evanston. This is also a revenge game for the Irish, as the Wildcats knocked the Irish out of the tournament last season.

The Irish will play eight conference games, and they will look to finish higher than fourth in a very difficult ACC for the first time since 2016. However, this team’s sights are set for more than just a good finish in the ACC, they are looking to make the final four and possibly even win the school’s first ever National Championship.

Last year, the men’s team finished 9-7 and had a gut-wrenching overtime loss in the quarterfinals of the NCAA tournament to Duke. This year’s Irish team will not look very different in terms of faces on the field, but on the sidelines, the Irish have two new assistant coaches in Chris Wojcik and Ryan Wellner. Wojcik will take over as offensive coordinator after being the head coach of Harvard’s men’s lacrosse team for the previous nine seasons. Wellner will take over the defensive coordinator position for Gerry Bryne, who will become the new head coach at Harvard after 16 seasons as the Notre Dame defensive coordinator.

The Irish return six of their top-seven point leaders, including Bryan Costabile, who led the team with 42 goals. Costabile is a preseason first-team All-American, as well as preseason ACC Player of the Year according to Inside Lacrosse. Costabile will be the catalyst for this offense just like he was this past season. The only difference, though, is that the pieces around Costabile are much more experienced. After Ryder Garnsey was academically ineligible for the majority of the season, it forced underclassmen Conor Morin, Wheaton Jackoboice and Griffin Westlin to step into a bigger role than they may have been expecting, but now they are poised to build off last season’s successes.

Defensively, the Irish will have to replace Hugh Crance and short-stick defensive midfielder Drew Schantz, but they bring back preseason All-Americans Arden Cohen and Jack Kielty. The Irish also return face-off specialist Charles Leonard who was All-ACC last year. At the goalie position, the Irish return Matt Schmidt and Jack Zullo who split time throughout the season, and they also add the number one goalie recruit, Liam Entenmann.

To add to the experience that is coming back, the Irish brought in the number two recruiting class in the country, which includes eight players in the top 100. With this combination of experience and young talent, the Irish have a chance to do great things. The Irish come into this season at No. 6 in the Nike/US Lacrosse Men’s Preseason top 20 and will look to make it back to Championship Weekend for the first time since 2015. This will be a difficult challenge for the Irish, as they have one of the toughest schedules in the country. Their schedule includes eight teams ranked in the preseason top-20, five of which are in the top-10. The Irish open the season on Feb. 15, when they host Cleveland State.