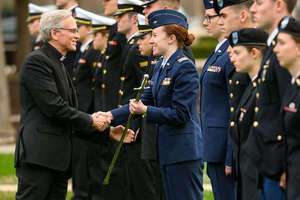 The Reserve Officer Training Corps (ROTC) is a college program dedicated to preparing young adults to serve as officers in the U.S. Military, and often, scholarships are offered for participants. Notre Dame is one of the few universities to offer all of the ROTC programs: Air Force, Army, Navy and Marine Corps.

Until 1970, women were not allowed to join ROTC at any college in the United States. Now, every ROTC program at Notre Dame, and many across the nation, is composed of both men and women who have dedicated several years of their lives to one common goal: serving their country.

“When I received the Marine Corps ROTC scholarship, I knew that was the path I wanted to take,” said Saint Mary’s freshman Whytnie Miller, a first-generation college student. “I’ve always wanted to join the Marine Corps. ‘The Few, The Proud’ — I believe it’s a testament to yourself as well as others because there’s not as many people, and especially women, in the Marine Corps.”

Despite the growing number of women in ROTC, the organization is still dominated by men.

Erin Glendon, a senior in the Army ROTC program, is one of four women in her class. “Being a female in the military, you’re held to a different standard. You have to prove yourself, but it’s cool to be part of a little group. As soon as you see another female in a military setting, it’s like ‘Ah, yes! A friend!’”

Glendon also addressed growth in female participation, specifically in Army ROTC. “We’ve seen more women get involved every year, get more leadership positions, get more fit, and it’s awesome. I love being a part of that.”

Women in ROTC at Notre Dame are no strangers to the typical stereotypes that surround women in the military. Stephanie Zaccone, a senior in Air Force ROTC, shared that being a leader as a woman in service doesn’t mean you “have to be the kind of leader that’s loud, manly and crawls around in the mud. You can be a different kind of leader, and the services are looking for a variety of individuals who lead well.”

Mary McCann, a junior in Navy ROTC, expressed a common sentiment shared by those in ROTC: the feeling of being part of something bigger than yourself.

“With ROTC, you’re committed to something that is a lot more intense than what most people are used to or expect, but it offers a built-in support system that no one else has,” said McCann. “And being a woman — I honestly think that it’s made my experience better. It’s an extra layer of bonding to know that you have this shared experience of being a female."