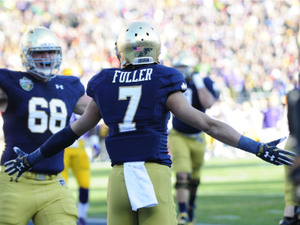 In a season of ups and downs, one player solidified his place as Notre Dame’s biggest aerial threat: sophomore wide receiver and Notre Dame Offensive Player of the Year Will Fuller.

Fuller broke through a tough preseason competition at the wide receiver position, emerging as the leader of the receiving corps.  His 1,094 total receiving yards, 21st in the nation for 2014, place him in the midst of college football’s elite pass catchers.

He caught more passes this year than any sophomore in Notre Dame history, shattering Golden Tate’s 2008 mark for receptions. Fuller’s 15 receiving touchdowns placed him third overall in the FBS, one spot below Alabama’s Biletnikoff Award winner, Amari Cooper.  He was also placed on the list of All-American Honorable Mentions for 2014.

His rise to become the Irish’s top target has been meteoric. As a standout high school player in Philadelphia’s Catholic League, Fuller had impressive speed but not ideal Division-I size. The lanky young wideout decommitted from Penn State to sign with Brian Kelly and the Irish; his only other major offers came from Rutgers, Boston College and Temple. What he lacked in size, Fuller made up for in intangibles.

While recruiting Fuller, Brian Kelly said, “His ball skills were outstanding. His top-end speed was outstanding. Tracking the ball with that kind of speed is a rare commodity, and those are the two things that stood out.”

Rather than take a full redshirt year to adjust to the college game, Fuller made an immediate impact. He started in three games and saw playing time in all of them. His 26.7 yards per catch led the team in 2013.

With nine catches for 89 yards in Notre Dame’s early-season blowout of Michigan, Fuller made his first case as the team’s top target. He garnered early praise from senior quarterback Everett Golson.

“If I was that corner [covering Fuller], it would be scary for me just knowing how versatile he is,” Golson said.

His breakout game came against Syracuse, where he had six catches for 119 yards and two touchdowns. His breakaway ability was on full display with a 72-yard touchdown catch in which he torched one-on-one coverage and used pure speed to score. The deep ball was a common theme for Fuller this season, but it’s not the only aspect of his game.  By no means a one-dimensional player, he displayed great hands and a strong ability to catch the ball in traffic. Scoring ability, however, may be his biggest asset. Fuller had as many receiving touchdowns as the rest of the team combined.

“Last year I hardly played,” Fuller said. “This year at the beginning of camp, I wasn’t even starting.  I felt like I was going to be a role player. It’s still a dream.”

As important as talent and preparation may be, Fuller feels he has one other quality that gives him an advantage on the field.

“The biggest thing is confidence,” Fuller said. “A player in general without any confidence — it’s hard to really have any success. You can play as well as where your confidence level is.”

The Irish bring back nearly all of their primary receivers for 2015. With all that returning talent, this unit will likely be one of the team’s strongest. Look for Will Fuller to land high on 2015 preseason award watch lists.

With Fuller’s place as the top Irish target solidified, defenses will likely key heavily on him next season. This may pose new challenges for both him as an individual and the entire offense. A quarterback controversy could also be problematic, as sophomore quarterback Malik Zaire will make his case against senior Everett Golson for the starting spot. The receiving corps will have to be ready to catch passes from either QB, which also requires being comfortable with throws made by a lefty and a righty.

The Irish will also likely need to spread the ball around more than in 2014.  Look for Brian Kelly to place increased emphasis on the short passing game, especially screens, which worked well for other dynamic passing teams like Oregon in 2014. The spacing such a system provides could give Fuller opportunities to make plays in the open field and have another strong season.