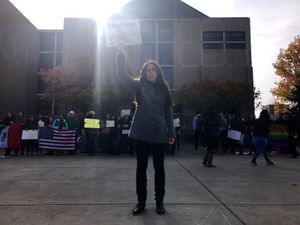 Saint Mary’s freshman Deyaneira Garcia is an undocumented immigrant who is temporarily protected from deportation under the federal Deferred Action for Early Childhood Arrivals program, or DACA, a policy Trump has said he’ll end. Garcia’s mother and brother are also undocumented, and Garcia said she is terrified for the future.

“Everything my family and I have built in this country could be torn down by next year,” she said.

She said she showed up to protest Wednesday because, “I wanted people to see my anger, sadness and disappointment. I wanted to put a face to the movement and show people that Trump's xenophobic rhetoric, racism and misogyny affects real breathing humans.”

She tearfully hugged her friend as the protest ended. “I felt so emotional. I think part of it was the state of anxiety that I'm in — not knowing what will happen next — and another part was seeing people come together and hold space for one another.” 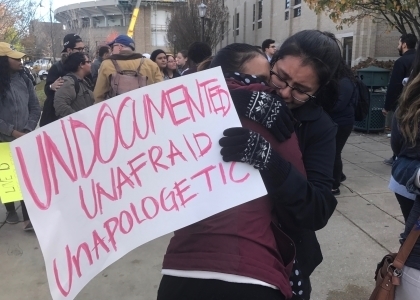 Fifth-year senior Patricia Fernandez De Castro emphasized that the protest wasn’t simply in response policies students disliked. “This actually changes things for a lot of people,” she said. “People are afraid, and we just want to show that to the Notre Dame community.”

“Yes, it's four years,” she added. “It's not permanent. But how can you not be sad when you see your friends ... They're dreading their situation.”

Roxana Rodriguez, a junior in Pasquerilla East, joined the protest Wednesday. She is protected from deportation through DACA, but after she learned that Trump won the election, she said she was worried.

She wondered, “Are we going to get deported? Am I going to be able to work after I graduate here? He said he would take my DACA status away.” Her post-grad plans had been to become a doctor and work in the U.S., but she has new fears: “The future. My family's future.”

"It looks like I'll maybe have to rethink the future," she said.

Rodriguez burst into tears while protesters chanted in support of their families. "I think we just needed an outlet,” she said. “It feels good that we are not alone, despite the results. There are people that still care.”

*This story has been updated to include an interview with Deyaneira Garcia. 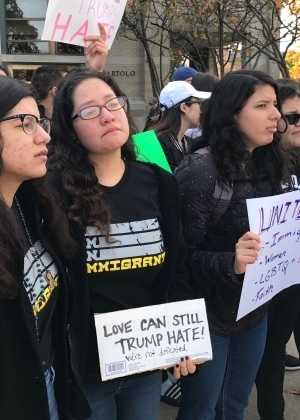 Junior Roxana Rodriguez teared up as protesters chanted about family. She is worried that they could be deported. 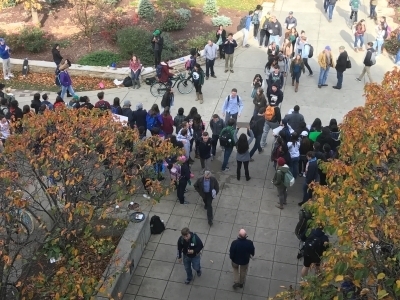 Around 80 protesters lined the pathway to Debartolo Hall during morning classes.