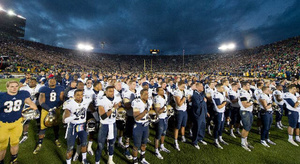 It was fourth-and-8 from the Navy 24-yard line. There were 45 seconds left, and the game was tied at 28. Brandon Walker had missed a field goal from 40 yards early that day, so Charlie Weis sent out Evan Sharpley, Armando Allen and the offense out to attempt to convert. Sharpley dropped back to pass, and Ram Vela, 5-foot-9 Ram Vela, leaped over Allen’s attempted block, sacking Sharpley and sending the game to overtime.

That was the moment, right then, that Notre Dame should have (a) terminated the rivalry with the Naval Academy, and (b) fired Charlie Weis (but that’s not what this is about).

Navy went on to sink Notre Dame 46-44 in triple overtime, ending a 43- game losing streak to the Irish and propelling the Midshipmen to win two of the next three meetings. At that moment, Notre Dame should have ended its football relationship with Navy.

If you don’t know the story behind the Irish and the Midshipmen’s historic rivalry, here it is: the two schools began playing because, as then-president Rev. Matthew Walsh, C.S.C., said, “Notre Dame, Army and Navy make an ideal group for a football triangle. Their students live on campus, they draw their student body from all parts of the country...” They were three like-minded institutions that had a commitment to academic and athletic excellence.

But the series gained staying power and was elevated to the level at which it exists today because of World War II. As the United States entered the war effort, Notre Dame’s enrollment plummeted to below 3,000 students, and the school’s endowment fell to $3 million, among the smallest in the country for a university of Notre Dame’s size.

Then Navy came to the rescue. They set up the V-12 Navy College Training Program, essentially Naval ROTC, which produced more than 12,000 Naval officers and ensigns during the war. Money flowed back to the University. Rev. Theodore Hesburgh, C.S.C., said of the Navy’s impact: “We had a couple years with no income and a lot of expenses. If it wasn’t for the Navy, we would’ve had to close within a year.”

Since then, Notre Dame has remained indebted to the Naval Academy. In the 1960s, however, when schools across the country were abolishing their ROTC programs because of the Vietnam War, Notre Dame returned the favor by maintaining the Naval ROTC on its campus.

All of that blossomed into the longest-running matchup in college football, going on 92 straight meetings when the two teams face off in San Diego this year. It’s high time that the rivalry ends.

The Irish often come away from the game with a myriad of injuries. Navy’s propensity to cut block the legs of Irish defenders has led to what feels like countless knee injuries, and last year Equanimeous St. Brown was upended by a tackle and landed on his head, knocking him out for the rest of the game. In 2015, Jerry Tillery was sidelined for most of the game with a sprained elbow and bone bruise. It’s a dangerous game, plain and simple. Furthermore, even if the Irish manage to escape the game without serious damage, they have traditionally struggled in the next game, referred to as the “Navy hangover game.” In 2013, Notre Dame lost to a middling Pitt team after knocking off Navy. The next year, the Irish were wrecked by a loss at Arizona State after beating Navy. In 2016, the Irish played Navy and Army back to back, splitting the meetings. It followed up those performances with a loss on senior day at home to Virginia Tech. Playing Navy leaves a lasting impact that affects Notre Dame’s chances to succeed in a very negative way.

Finally, the Navy game doesn’t prepare the team for success throughout the year. Preparing for an entire week to combat the triple option only helps to beat teams who run the triple option. The next week when travelling to Tempe to take on a pass-first Arizona State team, or when playing a team who runs a pro style or spread offense, the Irish would have to completely change the way that they prepare.

Beating the Midshipmen should be a near certainty. They’re physically tough to play but they rarely offer much defensively and are never in the national conversation as far as a big bowl game goes. It will never be a good win to beat Navy. It is always a bad loss.

The story behind the rivalry is touching, and our debt to the Navy can never be understated. But on the gridiron, the list of things that matter goes as follows: the team with the most points at the end of the game. Those things that do not matter: the size of the endowment, what happened during World War II or how much respect one has for the guy lined up across the line ready to knock him to the ground.