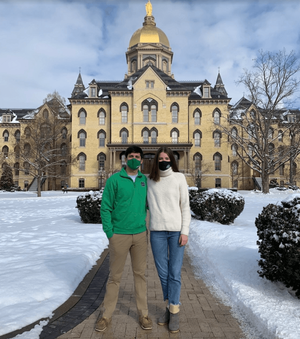 Juniors Mabry Webb and Jacob Calpey felt a duty to run for student government president and vice president this year because of a shared love for the Notre Dame community.

When asked why he was running, Calpey said “it all just came down to loving Notre Dame,” a sentiment that was echoed by his running mate when Webb discussed the many challenges that Notre Dame has faced this year.

Their ticket blends together an understanding of student government with a “fresh, different perspective,” as Webb has been heavily involved in student government the last two years while this will be Calpey’s first experience. Despite his lack of experience, Calpey “finally felt comfortable to make that leap” into student government and believes he is ready to represent the student body. “There will certainly be a learning curve,” he acknowledged, but he believes his “fresh perspective outweighs that.”

Both candidates have experience serving their dorm communities that taught them skills necessary to be leaders on Notre Dame’s campus. Webb serves as the co-president of Cavanaugh Hall, mentioning that this role has been especially challenging in our new, COVID-transformed world. Calpey, meanwhile, has served as the treasurer of O’Neill Hall the last two years, as well as running the dorm’s eatery and serving on the Welcome Weekend staff.

Calpey believes that their combined experiences will allow them “to make an awesome impact on this campus.” As the only ticket with a female candidate, Webb hopes to use her unique Notre Dame experience to impact some of the policies in place on campus.

Gender is not the only element that distinguishes this ticket. “Our biggest thing that sets us apart is our ability to be flexible or adaptable,” Webb said. To stay nimble, the team attempted to keep their platform more succinct with “tangible, feasible and concrete goals.” Webb added that “maybe 10% of the things we want to work on will get worked on,” but they would have to adjust for the other 90% as unique challenges emerged during the next school year.

While their platform may not have been as lengthy or in-depth as some of the other tickets, they wanted to focus on policies and differences they could make within a one-year term.

“I don’t want to go making empty promises,” Webb said. “I know there are a lot of people feeling frustrated with student government,” she said, explaining that they made the decision to run on a more narrow platform  to leave room for growth.

Some of their goals for next year include: establishing a Sexual Assault Response Team (SART); providing more resources for the University Counseling Center (UCC);  implementing telehealth appointment options at St. Liam’s; establishing better sustainability practices on campus; and increasing the transparency of student government as a whole.

Establishing a SART at Notre Dame would be “best practice,” Webb said, adding that “most universities already have one in place.” The team believes that advocating for these victims and allowing certain protections within the student union constitution will create a safer campus community for all students.

Both candidates spoke about their experiences with the UCC and said there was room to improve that system, if the office offered additional resources. When he attempted to register for an appointment, Calpey said, he found himself stuck on a two-week wait list — an issue the school should and can, he believes, address. The ticket also advocates for hiring therapists from marginalized communities to better serve the diverse needs of students.

If elected and given the opportunity, Webb aims to create additional sustainability measures on campus that will reduce the amount of waste that Notre Dame produces. One such initiative involved addressing  the amount of waste generated throughout the move-in and move-out process, during which students have minimal opportunities to recycle belongings. While Webb believes that sustainability often “gets overlooked in most platforms,” it will be a focal point of their platform.

The final issue was one Webb emphasized often: transparency. She believes that many students on campus do not have an understanding of what student government does, and more importantly, which projects they are currently working on. Webb and Calpey want to keep students more informed about the happenings within student government, including matters of the budget, by hosting two-way office hours. In addition to scheduling time to meet with Webb and Calpey in the student government office, student leaders may also book the pair to attend their club meetings.

While Webb and Calpey have certainly set some high goals for their administration, they believe that they are achievable if they “start conversations” within the student body early and remain adaptable.