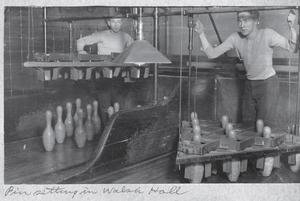 “Character” has become an often-heard term on campus. It encompasses the unspoken “but” that accompanies every hesitant piece of dorm room optimism: “It’s small, but it has character!” or “The windows don’t close, but it has character!” Saying a room has “character” almost always comes with a laugh and an acknowledgment of old age and out-of-date layouts.

The women of Walsh Hall know this well. Walsh (as proudly stated in Frosh-O serenades) is one of the oldest and most traditional women’s dorms. As any of its residents know, this means the building comes with more than a few unique quirks. It was originally a men’s dorm and in its heyday was considered highly luxurious. It boasted private bathrooms, closets and pool tables.

Today, Walsh may no longer have the same reputation, but what it lacks in air conditioning, it makes up for in character — mainly with unorthodox room configurations that come from times long since past.

“It’s interesting to see how unique Walsh has always been because of the history it’s had as one of the first dorms here,” sophomore Monica Golbranson says. Arguably Walsh’s biggest quirk is rooms that were once used as bowling alleys. Today, lucky inhabitants find themselves tasked with the tricky assignment of configuring beds, desks and bureaus into strangely long and narrow floorplans. It can make for an interesting freshman year setup.

But bowling alley rooms are just one part of an eclectic collection of Walsh room configurations, which also include single rooms, spacious quads and rooms with bay windows, distinguishing Walsh from the newer dorms.

Yes, rooms in Walsh are old and impractical — but simultaneously unique and memorable, lending themselves to future generations of freshman year nostalgia and laughs of, “It had character!”