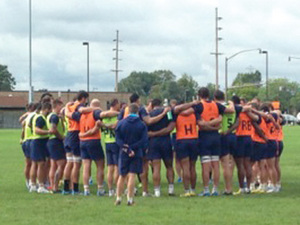 Outlined against a familiar blue-gray South Bend sky, warriors took the field clad in a different shade of blue and gold, hailing from a different country and playing a different game, but their objective remained the same: win a championship.

On Aug. 29, the Australian national rugby team arrived at Notre Dame, where they trained for two weeks, in preparation for a September friendly match with the U.S. Eagles in Chicago preceding the 2015 Rugby World Cup in England.

When the World Cup precursor with the U.S. was scheduled months ago, the Wallabies’ leadership sought a nearby venue with world-class facilities to serve as a training home, scouting Northwestern and Notre Dame as options.

A connection between the organization and the Notre Dame athletic department was discovered, and the Aussies ultimately chose to travel to South Bend rather than remain amid the bustle of the city.

Matt Howley is that link as an Australian serving as director of sports science at Notre Dame. The Aussie team contacted Howley last spring, and discussions evolved into an agreement between top officials that gave the Wallabies an opportunity to train and the Irish a chance to learn.

South Bend offered the Australian team a perfect setting for a training camp to focus and hone skills before heading to Soldier Field and ultimately departing for Bath, England.

Stepan Fields, usually only home to the occasional resurrection of high school glory during inter-hall competitions, was transformed into a training ground for an elite team in search of redemption.

The Wallabies of Australia are a perennial contender in the rugby world but have not secured a World Cup championship since 1999. After a heartbreaking loss at home to England in the 2003 World Cup final and more English-bred disappointment in 2007, the Australians see the 2015 event as a chance for redemption.

One young Australian in particular expressed his gratitude for the opportunity to contribute.

Will Skelton stands out as enormous among a group of very large men. Standing at 6’8” and weighing 308 pounds, Skelton is the largest player on the team and one of the largest in the World Cup.

Despite his overbearing size, Skelton takes nothing for granted.

“Inside, I was screaming. I was so happy. It wasn’t really until I got home that it hit me that I had made the 31-man squad and I was a part of a special group,” Skelton says of when he was informed he made the team by one of the famed members of the ’99 squad.

Skelton is young enough to be a student at Notre Dame and was thankful for the opportunity to train here.

“It just is really encouraging and builds up that form for us to train hard and really get our work done here,” Skelton says.

Members of the Notre Dame athletic department enjoyed the Wallabies’ stay as well, tapping into a wealth of professional knowledge on performance and training technique.

One of the biggest teaching points to translate to student-athletes comes from the Wallabies’ professional behavior.

“It’s a lot different from the ways a collegiate athlete acts, and I think we can learn a lot as practitioners and coaches from them,” Howley says.

The message was well received by student-athletes as well.

“You could tell they were at the highest level of performance,” Andrew Presing, captain of the Notre Dame rugby squad, says. “It was just amazing to see the speed of the game and the level of communication on the field.”

In between training sessions, the Wallabies enjoyed the Notre Dame scenery. The team stayed in the Morris Inn, could be seen riding bikes around campus and interacted with members of the Fighting Irish football team.

Irish wide receiver Corey Robinson tweeted his appreciation for the experience, “It was great meeting the Wallabies players and coaches! Great people and players. Best of luck in the World Cup!”

The Wallabies motto is “Stronger as One.” The two weeks spent on Notre Dame’s campus allowed them to band together. The Australians will carry the fighting spirit learned here as they embark on their quest to return glory down under.