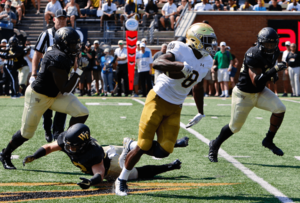 After squeaking by with unremarkable victories against Ball State and Vanderbilt, Notre Dame had some serious questions to answer despite its undefeated record. Lackluster performances by the offense, salvaged only by strong defensive play, placed pressure on head coach Brian Kelly to make a change. His solution? Replace senior quarterback Brandon Wimbush with junior Ian Book, who had only one start against the University of North Carolina under his belt. A heroic relief effort late in the 2018 Citrus Bowl victory, however, gave the Irish reason to believe that he could find a way to win.

“We made a big decision to go with Ian Book in the game,” Kelly explained, “and so I didn’t sleep great last night. That’s a big decision to make when you are 3-0 and your quarterback who was leading your team was 13-3 as a starter, but I had a lot of confidence in Ian.”

With Book at the helm, the Irish offense started off a little shaky — the first three drives resulted in a punt, a turnover on downs, and a fumble. When asked if he was apprehensive about undertaking the starting role, Book said, “I think it’s good to have nerves ... You should be a little nervous.”

The Demon Deacons put points on the board first, hitting a field goal to take a 3-0 lead. That marked the first time all season that the Irish found themselves trailing in a game, but the deficit lasted just over two minutes.

Sophomore running back Jafar Armstrong raced 30 yards to the end zone, giving Notre Dame its first points. Wake Forest countered with a field goal, but another 80-yard drive culminated in Book’s first passing touchdown of the day. The Irish defense, solid as ever, forced a punt that senior wide receiver Chris Finke returned 52 yards – the team’s longest return since 2014. Junior running back Tony Jones Jr. made his mark by adding another six points, and minutes later Book used his own legs to send the Demon Deacons spiraling. The score was 28-13, and Notre Dame never looked back.

After halftime, Book continued to drive the offense down the field time and

time again. He connected with junior wide receiver Chase Claypool through the air, handed the ball off to Armstrong, and kept it himself twice as the Irish once again found the end zone on four straight drives. This feat had not been accomplished since 2016. Wake Forest would tack on a pair of late touchdowns, but a comeback was far from threatening.

When Book took a knee to seal the win, the final score read 56-27 in favor of Notre Dame. This marked Notre Dame’s most points scored in a true road game since 2003, as the offense totaled 566 total yards and converted all eight red-zone trips into touchdowns. The cumulative margin of victory against Michigan, Ball State, and Vanderbilt was 20 points, which the Irish nearly doubled in this single contest.

Much of the postgame credit went to Kelly’s bold move in starting Book, whose 13 yards per completion was the most for a quarterback with at least 25 completions since Jimmy Clausen in 2009. “Every week, I’ve tried to prepare like I’m the starter,” Book said, “and when my name’s called, I need to go in there and play my best and make sure the offense can succeed.”

Notre Dame’s defensive play, however, was not to be overlooked. The Irish held Wake Forest to 398 yards of total offense, over 100 fewer than their season average, and 1.5 fewer yards per play as well. “They were going to grind it if they were going to score,” Kelly noted after the game.

The conditions throughout the game were less than ideal, with field temperatures ranging between 128 and 136 degrees. “You get challenged on the road against Power 5 football teams, but you don’t expect it to be over 100 degrees on the field against an up-tempo team,” Kelly said. “That challenge, in terms of conditioning and your football’s team ability to handle that, that to me is very satisfying because you know that you have prepared your football team. When they kick it off a lot of my work is done – the kids have to go play.”