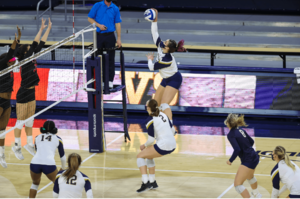 Since returning to the court, the Notre Dame Volleyball team has been on a roll, winning five of their first seven matchups. This early success has led to a No. 18 ranking in the country. The Irish opened the spring season on Feb. 18 when they defeated Valparaiso in a five-set match after having almost four full months off. The Irish were on their heels, going into the fourth set trailing 2-1, but in an eventful fourth set that had 10 lead changes, the Irish pulled it out 26-24. They would eventually close it out in the fifth set 15-10. Prior to the winter break, the Irish were 6-1 with their only loss being to the University of Pittsburgh. The Irish sit at 11-3 overall and are currently third in the ACC behind Georgia Tech and Louisville.

The Irish attack is led by outside hitters Charley Niego, Caroline Meuth and Aubrey Hamilton who have combined for 483 of the team’s 714 kills. Niego is ranked sixth overall in the ACC in both kills and service aces per set with 3.91 and .39 respectively. Meanwhile, junior setter Zoe Nunez has been an assist machine with 575, which puts her tied for first in the ACC for assists per set (10.75/set). Last season, both Nunez and Niego were named First Team All-ACC, while Meuth was named to the Second team. These three look poised to find themselves on All-ACC teams once again this season as well.

In his third year as head coach of the Irish team, with an overall record of 41-23 and an NCAA Tournament appearance in 2019-2020, Mike Johnson looks poised to return his team to the tournament upon the conclusion of this season. With upperclassmen leadership and experience from Hannah Thompson, Nunez and Niego paired with production from freshmen Hattie Monson and Hamilton, who have played in 53 and 52 of Notre Dame’s 53 sets this season, the team has the perfect mixture for continued success. Both Monson and Hamilton were ranked in the top 50 of PrepVolleyball’s Senior Aces list and have proven it on the court.

Since the Valparaiso match that opened the spring season, each of the Irish’s last four wins have been three-set sweeps, while their two losses were five-set battles. The wins include victories over North Carolina State, University of Miami, Virginia Tech and Wake Forest, while the losses were to Florida State and North Carolina. The Irish are also currently the second-highest ranked team from the ACC in the country behind Louisville, who the Irish have yet to play.

In the Irish’s recent match-up against North Carolina on March 21, the team put up a valiant comeback but came up just short. The Irish started in a hole, dropping the first two sets 23-25 and 21-25. They then turned it around in the next two sets led by Nunez, who was setting up Meuth and Niego for kills. The Irish would take the third and fourth sets 25-21 and 25-18, setting up for the pivotal fifth set. In a set that had three lead changes and four ties, the Irish fell 15-9, giving the Tar Heels the victory.

The Irish have two remaining games on the schedule before the ACC and hopefully, the NCAA Tournament. They travel to Atlanta on April 1 to take on Georgia Tech and then turn around and play Duke the very next day in Durham. Georgia Tech is currently 11-2 overall, while the Blue Devils are 9-9. Notre Dame has yet to play either of these opponents, but these games offer great opportunities to gain some momentum heading into the postseason. The volleyball program looks to continue to build on what Johnson has started to create by turning into a perennial tournament team, and eventually, a national title contender.