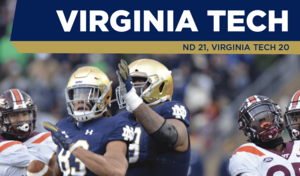 After a 30-point loss at Michigan, Notre Dame’s playoff chances were gone. The season came to a crossroads in game number eight versus Virginia Tech. With 3:34 left in the fourth quarter, the Irish appeared bound to drop their second straight game as Virginia Tech led the game 20-14 and had the ball.

The Irish won the toss and elected to receive the opening kick. After a three-and-out from each team, Notre Dame was able to drive into the red zone. On third down from the Virginia Tech 17-yard line, an errant pass from Ian Book was intercepted by linebacker Dax Hollified. The Hokies had come to play. The Irish offense got the ball back on the Virginia Tech 26 after a 16-yard punt return from Chris Finke. After marching the ball down the field, Notre Dame opened up the scoring with an 8-yard touchdown from Book to tight end Cole Kmet.

The Irish defense forced four three-and-outs on Virginia Tech’s first four possessions, but on the fifth Virginia Tech would go 45 yards in eight plays to tie the game 7-7 with just over a minute left in the first quarter. Right after the Virginia Tech touchdown, Notre Dame would answer with an 11 play, 77-yard drive capped off by a Tommy Tremble touchdown catch from Book.

On the next four drives, the defenses would force four straight three-andouts. With under five minutes to play in the half, Virginia Tech was able to move the ball into Notre Dame territory. But after an illegal man downfield penalty negated a 24-yard pass that would have put Virginia Tech in the red zone, the Irish defense forced a turnover when Jeremiah Owusu-Koramoah recovered a botched handoff attempt.

The Notre Dame offense put together a strong drive that ended abruptly when running back Jafar Armstrong fumbled the ball on the two-yard line with one second before the first half ended. To make matters worse, Virginia Tech’s Divine Diablo returned the fumble 98 yards for the touchdown to tie the game at 14 heading into the half. The fumble by Armstrong was the first fumble by a Notre Dame running back in almost four years.

At the half, the Irish had outgained the Hokies 243 yards to 85 yards, yet the game was tied and Virginia Tech would have a chance to take the lead at the start of the third quarter. They did exactly that, as Brian Johnson made a 44-yard field goal to give the Hokies a 17-14 lead. On the Irish’s first possession of the half, they were able to drive to the Virginia Tech 33 before Book was intercepted for a second time. Both defenses remained stout throughout the third quarter as neither offense had much success, and the quarter ended with Virginia Tech leading 17-14.

On the first play of the fourth quarter, Patterson II was able to connect with Tre Turner for a 50-yard reception to put the Hokies inside the Notre Dame 15-yard line. The Irish defense would hold Virginia Tech to just a field goal, and the lead was 20-14. Just like after the first Hokies field goal, the Irish were able to drive down the field but came up empty-handed. The drive was 17 plays and took over six minutes, but ended with a missed field goal from Jonathan Doerer from 35 yards out. The Hokies took the ball over with seven minutes remaining and a chance to run the clock out.

With under four minutes to play, the Notre Dame defense was able to force a Virginia Tech third down attempt. The defense needed to make a big play, and Khalid Kareem did just that with a sack. Notre Dame’s offense would get the ball at their own 13-yard line with 3:22 left and one timeout to win the game and turn the season around.

On fourth down from the Irish 20-yard line, Book was able to find Armstrong to keep the drive alive. The Irish were able to slowly and methodically move the ball down the field to the Virginia Tech 33 where they were faced with another fourth down. On fourth-and-10, Book was able to find Chase Claypool for 26 yards with 50 seconds remaining. On first and second goal, Book’s passes were incomplete. On third-and-goal, the Irish called a designed run for Book, and he was able to walk into the end zone untouched to give the Irish a 21- 20 lead with 29 seconds left. Kyle Hamilton was able to intercept Patterson II with two seconds left and cap off the win for the Irish. The game was one of the most thrilling in recent memory, and the hopes of a 10-2 regular season remained alive and well.