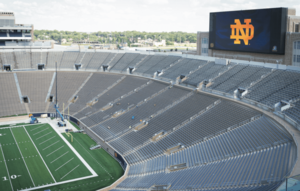 From Fighting Irish replays to screenings of “Rudy” for the annual Flick on the Field event, Notre Dame Stadium’s spectacular video board — which measures 54.1 feet high and 95.5 feet wide — exemplifies the school’s strides toward embracing the future and advancements in technology. The video board was completed just in time for the 2017 football season, making it the first time in Notre Dame history that a video board was used inside the historic stadium. The video board itself is attached to the newly- completed O’Neill Hall at the south end of the stadium, allowing virtually all fans to see it from their seats.

The construction of the video board was part of Notre Dame’s Campus Crossroads Project, the most ambitious building initiative in campus history. Campus Crossroads construction began in November 2014 and the Duncan Student Center, O’Neill Hall, Corbett Family Hall and many other renovations reached completion in January 2018. The Campus Crossroads project leaders have said that the need for a video board was communicated through students’ “strong desire to have better access to data and video when attending our games.” All of the video board’s 4,798,976 pixels are utilized during Fighting Irish home football games, giving fans live coverage of the gameplay, instant playback for highlights of the game and follow-along chants and cheers to fire up the crowd.

Notably missing from the video board’s lineup, however, is the inclusion of advertisements, logos or commercials. From the beginning, the video board was designed with the intention to remain free of commercials and advertisements. Chris Mascatello, the executive vice president of technology solutions for ANC Sports Enterprise, noted that Notre Dame Stadium’s video board is not an “advertising vehicle, unlike pretty much every other video display system in college or professional sports.”

The heart of Notre Dame is still preserved in the variety of messages played during game days. Heartfelt videos speak to the generosity of Notre Dame family-funded scholarships, and Campus Ministry reminds students, family, fans and alumni about what makes Notre Dame so special. Without fail, the one thing that can rally the student section like no other is the inclusion of Rev. Pete McCormick, C.S.C. in the Campus Ministry video messages.

Mike Bonner, executive producer of live events for Fighting Irish Media, remarked that the video board does not exist in contradiction to the tradition of Notre Dame: “It’s what we’ve always done here — the football and the pageantry and the students and all of that. We’re just looking to visually enhance it.”

From now on, as students cheer in the stands for their favorite football team, they’ll be flanked by the stadium video board to the south and Touchdown Jesus to the north, the perfect harmony of tradition and progress.