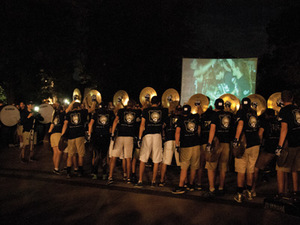 Every football home game weekend, Notre Dame’s campus comes to life. Visitors flock to South Bend for the game and immediately join the various events on campus that promote pre-game excitement. Some of the largest attractions include the pep rally on Friday and the player walk to the stadium on Saturday. Between these two hallmark events, however, is another that ushers in game day: at midnight, the Notre Dame marching band’s drummers gather in front of the Main Building, under the lights of the Golden Dome, for a special performance.

Minutes before midnight, the drummers of the marching band wait, surrounded by onlookers, under Mary’s watchful gaze. As the bells from the Basilica chime 12, students and visitors watch as the drummers play.

In addition to classic cheers and an ever-growing set list of adapted music, the mallet drummers perform a different, secret feature song each week.  The night before the UMass game, these drummers surprised the crowd and fellow band mates with their rendition of “Bohemian Rhapsody.”

Whether it is the band’s fluid and synchronized movements, the blending of the various drums and the light-up drumsticks, the rousing speech delivered by a senior drummer during the performance or the ritual’s setting beneath the Golden Dome at midnight, the atmosphere of Drummer’s Circle is charged and thrilling.

“It’s electric,” sophomore Ben Vasquez, a member of drummer’s circle, says. “Everyone feeds off of each other’s energy, and when we step into the circle, the adrenaline kicks in. Everyone’s excited and happy to be there.”

“Drummer’s Circle is such a moment of triumph, community and spirit,” junior Maggie Duncan, who plays cymbals for the band of the Fighting Irish, says. “It just feels like something bigger than me. Drummer’s Circle is the culmination of my Notre Dame experience.”

Even though it has grown to epitomize the drummers’ experiences at Notre Dame, Drummer’s Circle is a relatively recent tradition for the university, started in 2000.  Since then, it has taken place at midnight before each home game, weather permitting.  The drummers even attempt to recreate the tradition while on the road for the Shamrock Series. Last year, the band performed a midday Drummer’s Circle outside of Lucas Oil Stadium in Indianapolis.

The Drummer’s Circle consists of all of the drummers in the Notre Dame marching band.  In addition to regular band practices, the drummers rehearse for an hour and 45 minutes to prepare for the event.  These practices consist of members working within their subsections: mallets, cymbals, snare drums, bass drums and tenors. These subsections, however, do not define the band members.

“We’re a lot more than a group of people who do the same thing,” Vasquez says. “We get dinner together after practice and take up two long tables in South Dining Hall, and everyone knows each other.”

On Fridays before game days, the band members meet at 4 p.m. for warm-ups, rehearsal and the Pep Rally.  At 11 p.m., the drummers reconvene in the Ricci Band Rehearsal Hall to run through their performance and then head to the dome.

“It becomes game day at midnight,” Vasquez says. “And as soon as game day starts, we’re out there playing.”