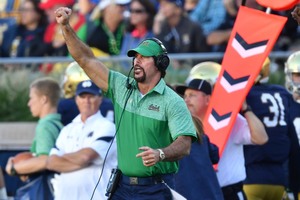 It’s simple: Notre Dame fans expect championships and dominant defensive performances. (Exhibit A: the 1988 national championship team.) It follows, then, that the play of the Irish defense so far is what has everyone in South Bend in an uproar.

Through four games gainst Power 5 opponents, the Fighting Irish have allowed an average of 39.3 points per game and 501.3 total offensive yards per game.

In a football atmosphere in which national championships are expected, it makes perfect sense that defensive coordinator Brian VanGorder experienced constant scrutiny by both the media and the fans.

The anger only grew with each defeat. Losses to Texas and Michigan State were somewhat forgivable since they came at the hands of historic football powerhouses. It was the loss to Duke, an unranked team that had already suffered losses to Northwestern and Wake Forest, that was the real tipping point.

Students began chanting “Fire VanGorder” during the later parts of the game when Duke was putting points on the board seemingly at will. During the postgame press conference, Brian Kelly said, “We’ll have to re-evaluate what we’re doing, who we’re doing it with, and how we’re doing it,” in response to a flurry of questions about staff by reporters.

The chants, articles and tweets calling for a change in Notre Dame’s defensive staff finally came to a head when the morning after the Duke game, VanGorder was fired and defensive analyst Greg Hudson was promoted to defensive coordinator.

Whether this change will help the Irish defense remains to be seen. The defense put together an uneven performance in their first game under Hudson, a 50-33 victory over Syracuse.

These coming games and weeks are absolutely critical to the future success of the program. The national championship is virtually unattainable, but if the coaching staff wants to pave the road for a championships in the future, the work needs to start now.