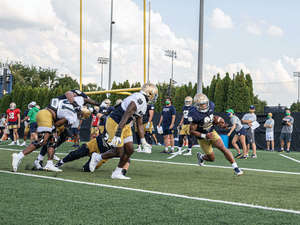 Throughout the summer, questions about the state of college athletics popped up around the country. Although NCAA President Mark Emmert stated, “We cannot, at this point, have fall NCAA championships,” the NCAA is hoping to host fall championships in the spring. Notably, this statement does not apply to college football, as the NCAA does not have oversight of the Football Bowl Subdivision championship, the College Football Playoff. While details surrounding various fall sports seasons and championship formats remain unclear, Notre Dame fall sports athletes have begun to practice.

The first official practice for the football team was held Aug. 12, the third day of classes for students. Many changes on campus have taken place in the short period since, the largest being a decision made Aug. 18 to pivot to virtual classes until Sept. 2. All fall sports were granted permission to continue to practice during this time. However, just two days later, five members of the football team were confirmed to have tested positive for COVID-19 and six others were quarantined. Practices were canceled from Aug. 19-21, and then resumed again Aug. 22. As of the time of writing, they were still in session.

In addition to football, other fall sports have begun practicing for a season they hope will be played. Both women’s and men’s soccer began practice Aug. 5 and Aug. 7, respectively, and volleyball practices kicked off Aug. 3. All continued to practice through the move to remote classes. While the situation that Notre Dame fall athletes face is ever changing, practices have not yet been hindered.