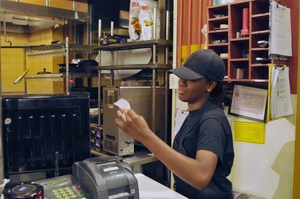 Piadinas with Pizzazz - Kenya Columbus checks out the next order to be made.

Service with a smile is a heroic act when working the late night shift at Reckers. The café is the university’s only 24-hour dining option. During the day, students can be seen enjoying smoothies, piadinas, and pizzas. During the late night/early morning hours of the weekend, however, the normally calm and studious environment becomes a loud and fast-paced zoo. But Reckers employees work hard to keep this Notre Dame staple running smoothly for its patrons.

The late night shift at Reckers is never easy — as any Reckers employee or patron can tell you — but one such unsung hero, Kenya Columbus, keeps it positive. A 22-year-old former daycare worker and native of South Bend, Columbus says that the best part about working at Reckers is working nights.

While many students are sleeping or studying in comfort, Columbus serves the rowdy customers that walk into Reckers late at night craving ice cream or French fries. “There are a lot of intoxicated students that come here,” Kenya says. “But they are very funny.”

Columbus learned about the job from a relative who highly recommended it. “My cousin had worked there and was telling me how much I would love it,” she says.

Instead of feeling irritated by the unique challenges of the late-night crowd, the action keeps Columbus entertained. “The nights go by faster,” Columbus says. She retains a sense of humor even when confronted with her worst experience, when “a girl threw up and tried to say it was smoothie.”

It takes a lot of patience and willpower to maintain a professional demeanor when in such an environment, but Columbus does it with a smile on her face and a great attitude. For now, she enjoys only working at Reckers on weekends; in ten years, “I hope to be teaching in a great elementary school,” Columbus says.

It is with an immense amount of gratitude that the students of Notre Dame reflect upon the hard work Kenya Columbus and her co-workers put forth to make sure the hectic, and often rambunctious, crowd receives their orders.

They are the unsung heroes that maintain the Notre Dame tradition of late-night “Reckers runs,” and without them, there would not be a safe and fun 24-hour food option on campus