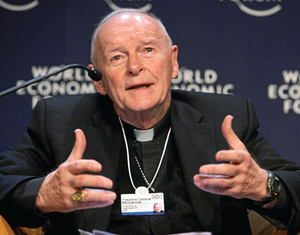 Jenkins released a statement in August 2018 when the initial investigations into the allegations against McCarrick were found credible and substantiated, promising to act according to the conclusion of a full canonical trial.

“Let me come out and say that any time the Church sins, it is awful and evil. But these sins of clerical abuse are, to me, particularly heartbreaking,” senior Old Collegian Johnny Ryan said.

Formerly considered a powerbroker in Washington and the Vatican, McCarrick now faces the recision of many of the 35 honorary degrees conferred over his decades-long career.

Originally ordained in 1958, McCarrick gained a reputation for ambition, political savvy and charisma. In 1986, he rose to the ranking of Archbishop of Newark and in 2001 he became a cardinal, serving as the archbishop of the district until his retirement in 2006. He continued to serve the Church as a diplomat for the Vatican and, at times, for the U.S until recently.

As was reported in a groundbreaking July 2018 New York Times article, while McCarrick rose through the ranks of the Catholic Church he repeatedly preyed on young male seminarians. While the details of his abuse and sexual harassment were not as well known, the fact that McCarrick was sexually active with other members of the clergy became an open secret amongst the people who knew him decades before the 2018 revelations.

McCarrick was often known to invite several of the seminarians he admired to his beach house in Sea Girt, N.J. where he encouraged the men he abused there to call him “Uncle Ted.”

“I trusted him, I confided in him, I admired him,” Robert Ciolek said. Ciolek, who in the 1980s was studying to be a priest, discussed with the New York Times the abuse he endured at the hands of the former cardinal.

Though McCarrick stated that he has no recollection of the abuse he has been accused of committing, it is apparent that allegations and warnings had circled for years. The first formal complaint was made in 1994 by a priest who admitted to inappropriately touching two minors and continuing the cycle of generational clerical abuse.

In 2000, Pope John Paul II promoted McCarrick to cardinal status despite being warned by Rev. Boniface Ramsey against the appointment. This compares to the similar disregard Pope John Paul II had for warnings against another sexual predator, Rev. Marcial Maciel. In fact, McCarrick became an advisor to the pope on the issue of sexual abuse in the church.

“I have blown the whistle for 30 years without getting anywhere,” Ramsey said in a New York Times article.

One of the issues this particular case has shed light on is the difficulty of reporting abuse within the Catholic hierarchy.

“In the corporate world, there are ways to report misconduct,” Ciolek said. “How is a priest supposed to report abuse or wrong activity by his bishop? What is their stated vehicle for anyone to do that? I don’t think it exists.”

Rev. Brian Ching, C.S.C, director of the Notre Dame Old College Undergraduate Seminary, reflected on the difficult emotions the young seminarians under his stead have had in light of cases like McCarrick’s.

“They were angry that those who vowed to be ministers of Christ violated that sacred trust in such horrific ways and also angered that the Church’s response to that situation was not as transparent or forthright as it should have been,” he said.

“I remember in the fall ... sitting in the chapel and asking God and myself, ‘Do I really want to do this?’” Ryan said, “The answer, I found, was a resounding yes. I realized that this is the time, more than ever, that we can’t leave the Church, but rather we need to lead the Church.”

In light of McCarrick’s case and the Pennsylvania grand jury report wherein hundreds of sexual abuse victims across six dioceses were uncovered, the university has formed two task forces, one to “facilitate dialogue” in the campus community and the other to research the issue fully, according to a statement made by Jenkins in October 2018.

In addition to these efforts, Old College applicants must undergo psychological screening prior to admittance to the program.

“Once in our program, the areas surrounding human sexuality, celibacy and human maturity are discussed extensively and monitored closely and appropriate growth in those areas is necessary for advancement,” Ching said.

According to Ryan, a fundamental tenet of becoming Holy Cross religious entails cultivating a humanity that acts as a “bridge, not an obstacle” to leading the Catholic community.

“I have taken up as my prayer now that verse from Jeremiah: Lord, make me a shepherd after Your own Heart (Jeremiah 3:15),” Ryan said. “And it begins with human formation: in order to be a good priest, a good shepherd, I need to be a good human being.”