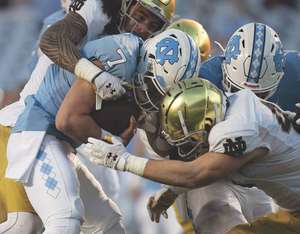 After a well-deserved bye week, the No. 2 Irish (8-0) traveled down to Chapel Hill for a Friday afternoon game against the No. 19 North Carolina Tar Heels (6-2). Notre Dame came into the game off of two of their best wins of the year but also had given up 71 points in those two games, which was more than they had allowed in the first six games. This could’ve been a major problem, as the Tar Heels touted a strong offense led by their two star running backs: Javonte Williams and Michael Carter.

Notre Dame received the opening kickoff and went three-and-out, giving UNC the ball at the 50. In seven plays, quarterback Sam Howell led the Tar Heels down the field, finding Emery Simmons in the back of the end zone to give UNC a 7-0 lead. Ian Book and company would answer with a nine-play, 75-yard drive of their own capped off with a 2-yard touchdown run from Kyren Williams to even the score.

On the ensuing drive, Howell would throw for 79 yards before finishing with a 2-yard run of his own to take a 14-7 lead. Through the first two drives, UNC moved the ball 125 yards in 14 plays, and it seemed as if the Irish defense had no answer for their high powered offense. On the Irish’s next offensive play, however, Book would find Javon McKinley for 42 yards, then ran for 33 of his own to silence the Carolina faithful as the Irish marched into the redzone. Then it was Book again, evading two defenders in the backfield and finding Williams to tie the game at 14-14 just before the end of the first.

On the first four drives of the second quarter, both defenses were able to force two punts each, and with just under six minutes in the half UNC took the ball over at their own 3-yard line. The Irish would force UNC into a third-and-20 situation, but a targeting penalty from Kyle Hamilton kept UNC’s offense on the field, and it seemed like the game had just tilted to UNC’s side. The Irish defense would step up, though, forcing a field goal with 1:10 remaining in the half to give UNC a 17-14 lead. Notre Dame’s offense then orchestrated a great two-minute drive to get into field goal range, and Jonathan Doerer drilled a 32-yard field goal to tie the game at 17 at the half.

After a quick punt from UNC to open the third, the Irish started with the ball on their own 3-yard line. Facing fourth and 1 from their own 24-yard line, Book got the defense to jump offsides. The Irish meticulously moved the ball down the field in 13 plays and capped it off with a Ben Skowronek sweep to take a 24-17 lead. On Notre Dame’s next offensive possession, Book would find McKinley again for a big play, but the drive would end in a missed 32-yard field goal. The story of the second half was the Irish defense, which held UNC to 58 total yards of offense and allowed them to cross the 50 yard line only once. The Irish took the ball over with just under six minutes left to put the game out of hand, and they did exactly that. In eight plays, 89 yards and over four minutes, the Irish moved the ball down the field, led by Kyren Williams who broke off a 47-yard run to start the drive and capped it with a 1-yard touchdown.

The Irish won 31-17 with a statement performance from Clark Lea and his defense, which looked out of place in the first quarter but eventually proved why they are one of the best in the country. With the win, the Irish clinched a spot in the ACC Championship Game