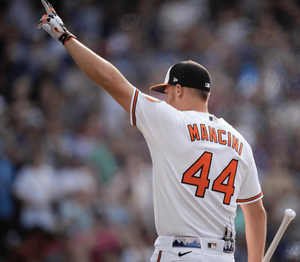 Baseball is more than a game for former Notre Dame baseball player and Orioles first baseman Trey Mancini. It is a safe haven and source of great personal joy. Anyone who has spent time with Mancini will tell you about his love for the game, his driven personality and his commitment to being a good teammate and role model.

But baseball was almost taken away from him in early 2020, when Mancini was no longer focused on beating divisional rivals and began a much more important battle with colon cancer.

In an interview with Sports Illustrated after learning about his diagnosis, Mancini said that he was “not thinking about baseball or anything like that. You just want to be alive.” Even in some of the scariest moments of his life, Mancini’s optimism prevailed.

Coming off the best season of his professional career, Mancini had slight irregularities in his spring training tests that prompted one trainer to recommend further testing to identify any health issues. These tests revealed that there was a large mass in his upper intestine, but luckily, the tumor had not metastasized to any other organs. It was later discovered that Mancini had stage 3 colon cancer that would require surgery and chemotherapy.

This, of course, also meant that there would be no baseball for Mancini in 2020, maybe even beyond. The same day that Mancini received his surgery in March 2020, MLB commissioner Rob Manfred announced the postponement of the MLB season due to the COVID-19 pandemic. Although worried about his teammates and their reaction to the suspension of the season, Mancini admitted that baseball was not at the forefront of his mind.

“There were times early on when I wasn’t entirely sure I’d be playing baseball again,” Mancini said to MLB.com. “I'd be lying if I'd say that was the first thing that came to mind. The whole time I just wanted to be healthy long-term and live a long life. And baseball definitely was on the back burner when I was going through all that.”

After several months, 12 chemotherapy sessions and too many bad days to count, Mancini emerged cancer-free and committed himself to preparing for the 2021 MLB season. Although baseball was not his top priority while he battled and beat cancer, Mancini often proclaimed that his comeback would not be complete until he returned to the diamond for the Baltimore Orioles.

As soon as he received the “good to go” from medical professionals, Mancini re-entered the weight room and started some minor baseball activities, continuing to train his body and learn its new restrictions. Mancini got back into MLB condition and returned to the Orioles in time for the start of the 2021 season.

More than a year after being diagnosed with stage 3 colon cancer, Mancini made his triumphant return to MLB on April 3 as the Orioles faced off with the Red Sox in Boston. Despite being divisional rivals, Mancini received an ovation from the home crowd and a warm hug from Red Sox shortstop Xander Bogaerts.

Friend and teammate John Means, the pitcher who got the start for the Orioles on Opening Day, could not have been more impressed with, and proud of, Mancini.

"It was really special," Means said. "He's a great player, a great teammate. And just seeing him back out there after everything he's been through, it's incredible. And he's gonna have a great season. I can't wait."

Despite a slow start with two ground outs in his first two at-bats, Mancini reached base in his next two at-bats (a walk and a single), scoring a run.

Mancini added there were high emotions coming into the game: both nerves and excitement. “I really just enjoyed the day,” he said. “I was overcome with emotion, but I held it together on the surface. It was such a cool day.”

Mancini returned to form in a hurry, and he ended the season with impressive numbers for someone who had not swung a bat in over a year. Mancini finished fourth on the team in home runs with 21, tied for second in RBIs with 71, second for hits with 142 and second for walks with 51.

Even with the numbers that Mancini put up throughout the season, the obvious highlight was his participation in the All-Star Home Run Derby. Among a stacked field of participants, Mancini made it all the way to the final against Pete Alonso of the New York Mets. His pitcher? Notre Dame pitching coach Chuck Ristano, who participated in the same event with Mancini at the collegiate level.

“It’s a possible once-in-a-lifetime opportunity, so it was something I couldn’t pass up,” Mancini told Scholastic. “I’m so glad I did [go], and the fact that I reached the finals and put up such a good performance was really special and made the day that much better. I personally have a lot of pride, I didn’t want to be seen as a charity-case invite or anything like that so I’m really happy with how it went. That my family and friends were there, the people that had been there for me through my whole cancer journey, was so special. It was just an incredible day.”

After all that he has been through, the ups and the downs of the last year, Mancini has returned to his safe haven, the baseball diamond.