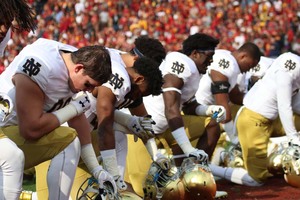 A legendary rivalry and a torrential downpour culminated in a tough final game for the Irish as they faced the University of Southern California Trojans in the imposing Los Angeles Memorial Coliseum. Entering this game with a record of 4-7, the Notre Dame football team looked for a victory to finish their disappointing season.

USC received the kickoff and continued with a long drive for the first five minutes of the quarter. The Irish defense contained the explosive USC offense and halted the Trojans at the Irish 19, leading to a 37-yard field goal for USC. With a good attempt, the score went to 3-0.

After a touchback on USC’s kickoff, the Irish set up for their first drive, and then shocked the stadium as sophomore Josh Adams ran the ball for 74 yards for a touchdown. This was the longest rushing play for the Irish this season. The extra point attempt by Justin Yoon was good, changing the score to 7-3.

The rest of the first quarter included some back-and-forth play and another touchdown by USC, leading to a score of 10-7. At one point, a fight broke out, showcasing the palpable tension between the two teams. The first quarter ended with rainfall, Irish possession of the ball and a sack by USC’s defense on junior quarterback DeShone Kizer.

As a result of the rain, the second quarter pushed both teams into relying heavily on the run game, but both Kizer and USC quarterback Sam Darnold had their fair share of incomplete passes as well. Points did not go on the board again until there was 1:24 left in the half. A short punt by junior Tyler Newsome led to a 55-yard return for a touchdown by USC’s Adoree Jackson, moving the score to 17-7. Kizer then threw an interception that USC returned for a touchdown, pushing the score to 24-7.

The Irish came back determined in the second half, with a forced fumble by freshman Julian Love after an Irish punt on their first drive of the quarter. This play resulted in a series of rush plays by senior Tarean Folston and short passes by Kizer. Ending with an Irish touchdown and an extra point from Yoon, the team added seven points to the board. USC would not back down, and would also add seven points to the score.

This trading of touchdowns continued for the third quarter as Kizer hit freshman Kevin Stepherson in the end-zone for an Irish touchdown, and USC completed an impressive 97-yard kickoff return for a Trojan touchdown.

The fourth quarter started rough: Kizer fumbled and USC recovered the ball; sophomore defensive back Nicco Fertilla drew a targeting penalty; an unsportsmanlike conduct penalty was called against Stepherson and sophomore Jerry Tillery on the same play that USC completed another touchdown, resulting in a 45-21 score.

After a switch at the quarterback position to senior Malik Zaire, the game ended with a final Irish touchdown and a failed field goal attempt. The final score of was 45-27.

Although an upsetting end to the season for Irish fans and players, some highlights of the game included the Irish surpassing the Trojans in passing yards with 254 yards and a standout performance by Adams with 17 carries covering a total of 180 yards.

“I’m proud of our team. All year they battled,” Kelly remarked on the results of the season. “There is one thing that I’m certain of is that we fight. These kids fight each and every week.”

“We’ve shown a propensity for self-inflicted wounds, be it special teams or offense or defense. Though our seniors won’t get much credit, they carried a big burden for the success of our program down the road.”