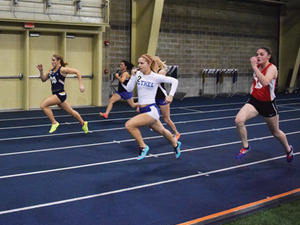 On the women’s side, sophomore Jessica Harris won the mile with a personal best time of 4:54.97.  Senior Lena Madison won the weight throw, while sophomore Jordan Shead took the crown in the 400-meter dash.

The Irish also received winning performances from sophomore Alexis Daugherty in the 800-meter run, junior Taylor Craft in the 60-meter hurdles and sophomore Ashlyn Rambo in the 3,000-meter race.  A team of four athletes, led by Shead, won the 4x400-meter relay.

While head coach Alan Turner was proud of his teams, he saw room for improvement before the team’s next meet on Jan. 16 in Wisconsin.

“It’s a long season and a long process, so I’m not pushing the panic button now for them to get it together,” he says.