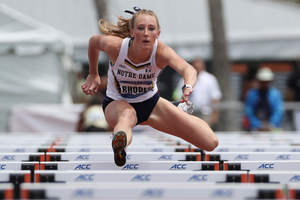 Beginning on Feb. 1, the Irish hosted the 32nd-annual Meyo Invitational and had a strong showing against some of the best teams in the Midwest. Notre Dame tallied two first place finishes, two top-15 relays and 25 athletes in the top 15.

The distance squad featured young talent. True freshman Jackie Gaughan posted the top Irish finish in the 3,000-meter race, clocking in third with a time of 9:22.88. Freshman Matthew Carmody ran 8:13.13 to secure sixth in the 3,000m. Sophomore standout Yared Nuguse won the Meyo Mile for the second year in a row, bringing it home in the final straightaway to win in 4:01.10, beating his Eastern Michigan opponent by less than two hundredths of a second. Senior Rachel DaDamio took eighth in the women’s one mile and senior Kelly Hart crossed the line in the 800-meter third overall with a time of 2:07.

In the 60-meter hurdles, junior Summer Thorpe won her heat in the semi- finals to progress to the finals, where she was joined by junior teammates Naya Sharp and Grace Cronin. Thorpe swept the finals, clocking in at 8.38 seconds, with Cronin finishing in sixth and Sharp in seventh.

Two weeks later, the Irish hosted the Alex Wilson Invitational and concluded their regular season with a record-breaking meet.

Sophomore Rachel Tanczos broke the school record in the weight throw competition with a throw of 20.12 meters. The record stood for two rounds until teammate Abbey Kapitan threw for 20.13 meters to break it yet again. Logan Kusky broke his own program record in the men’s weight throw, throwing for 21.13 meters and breaking the university record for the third time in four weeks.

The men’s distance medley relay was the standout of the meet. Made up of freshman Dylan Jacobs, senior Edward Cheatham, sophomore Samuel Voelz and Nuguse, the squad ran for 9:26:10. The Irish set a program record and posted the 2018-2019 NCAA leading time. They ran the second-best time ever recorded in the NCAA and were 0.12 seconds away from the NCAA record. The relay team was named NCAA Division I Track Athlete(s) of the Week and the ACC Track Athlete(s) of the Week.

Building off of this momentum, the Irish will travel to Birmingham for the NCAA Indoor Track and Field Championships on March 8.