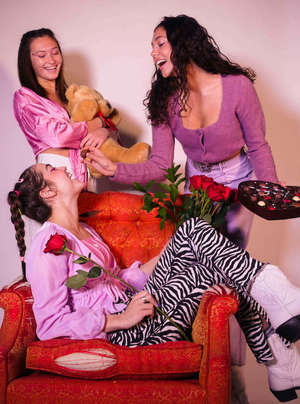 If you’re looking to feel inspired by fashion, beauty and lifestyle, keep your eyes on ​Strike​, a new student-run magazine that will be published for the first time in the fall of 2021. ​Strike​ was originally founded at Florida State University, but the magazine can now be found on numerous college campuses, including our very own.

Five Notre Dame sophomores​ — ​Theresa Tulsiak, Trinity Reilly, Ana Wolfermann, Cece Giarman and Olivia Mandella​ — ​decided “to create a space for creativity” that they didn’t see anywhere else on campus, lending themselves to becoming the founding members of ​Strike​ ​ND​.

Strike​ is entirely produced by students, which provides an opportunity for those interested to pursue professional experience not only in magazine production, but also leadership and teamwork. Reilly, co-editor-in-chief, shared that, while she doesn’t plan to work in magazine publication as a career, running ​Strike ND​ will teach her a lot of skills that are helpful in any job.

“Especially as editor-in-chief with Theresa, we are going to be doing a lot of problem solving,” Reilly said. “We need to take everyone’s voice and create one vision, one magazine.”

Reilly explained the planning process of the magazine, saying, “our first meeting for ​Strike​ was toward the end of last semester in November, and then over winter break we started having weekly Zoom meetings talking about planning applications, what positions we need, who is in charge of what, while looking at how Strike​ is run at other schools.”

As for their content? Anything striking. Strike ND’s Instagram page, @strikemagazinend, features a colorful feed that is certainly an insight into what’s to come. While Strike​ is primarily a visual publication, they do not plan on shying away from culture and current events.

“​Strike​​ ND’​s content will range from high fashion and couture, to more lifestyle, to things we see in the news,” Reilly said. “It’s really just celebrating everything we find exciting and new and innovative and inspiring. We want to create our own thing and go beyond what you typically see.”

Starting in the fall, Strike ND​ will be published once a semester. To keep their subscribers engaged between publications, the executive board plans on producing “mini shoots’’ for their Instagram posts. Even this semester, with COVID guidelines, the executive board is trying “to keep the momentum going and keep people excited about ​Strike​.” So far, they have tried to do so through an active Instagram presence and blog posts.

Reilly said that their content will become more consistent once Strike ND is fully staffed. Currently, their staff is only composed of the executive board, their five founding members. That being said, staff applications for their first issue closed in early March, so their team will soon be growing. For those who missed the deadline for the first issue, ​opportunities abound as Strike ND​ will put out a new issue with new staff every semester.

Staff positions range from writers and editors to make-up artists and set designers. There is also an external team that is responsible for finances, marketing, public relations and social media.

Reilly said that “​Strike​ has a place for everyone. We really want to be open to anyone who wants to join, whether they consider themselves creative or not. We want to see what everyone has to offer.”

Model applications, on the other hand, are rolling throughout the semester, in an effort to include anyone who wants to model. ​Reilly added that the goal of Strike ND​ is to be “very inclusive, very celebratory of everyone on campus,” which will include representing the diversity found at Notre Dame, Holy Cross and Saint Mary’s.

Reilly noted that while Strike’s official tagline is “Celebrate all things striking,” the Notre Dame founders have their own tagline.

“Our tagline for ​Strike​ ​ND that we have personally created is ‘find your people,’ and we feel really strongly about that. We hope that people take up that call."