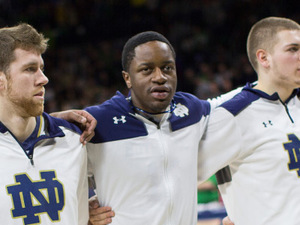 Junior forward Eric Katenda’s on-court performance for the Notre Dame men’s basketball team may not be remembered when one looks back on the 2014-15 season, but arguably no player’s contribution has been more impressive, considering where Katenda was three years ago.

Katenda was born in Paris, France and moved to the United States after his freshman year of high school. Ranked as the twenty-seventh best power forward in the 2011 recruiting class by ESPN, Katenda committed to play for Notre Dame in April 2011. He was described as “an undeniable talent with great size, length, athleticism and skills for a player his size.”

But in the summer of 2011, everything changed for Katenda. While playing pickup basketball in Washington, D.C. near where he was taking summer classes, Katenda’s optic nerve was damaged by another player’s finger when the two were going after a rebound. The freak eye injury left Katenda permanently blind in his left eye.

The injury caused Katenda to miss the fall semester of his freshman year, and put his basketball career in doubt. Head Coach Mike Brey, who promised to honor Katenda’s scholarship regardless of his playing status, expressed this worry to the Chicago Tribune when the injury occurred.

“[Katenda] understands that playing basketball at the Big East level may never be part of the equation again … I think he’s really come to grips with understanding that getting an education is now very, very important. He’s very realistic about it.”

Katenda never experienced this doubt, however.

Katenda redshirted during the 2012-13 season and entered last year’s preseason eager to fulfill his dream of playing basketball at the Division I level. But Katenda experienced yet another setback in October when a right knee injury suffered in practice required microfracture knee surgery and sidelined him for six weeks.

Finally, on Jan. 16, 2014 with the Irish taking on Virginia Tech, Brey called Katenda’s name. His on-court action against Virginia Tech lasted only one minute, but it was one more minute than many thought Katenda would ever play.

This season, Katenda has taken another step in the right direction. Before the Irish entered the conference season, Katenda appeared in 11 out of 14 games, totaling 28 minutes.

Although Katenda’s playing time has declined upon entering ACC play, this hasn’t discouraged the junior, who seems to have embraced his present role on the team.

“My personal goal is to challenge my teammates at practice and play as hard as I can to prepare them for the competition they are going to face,” Katenda says. “As a competitor, I would love to get some playing time, but it isn’t my role at the moment, so I am working hard to help my teammates improve.”

Barring future injuries to the Irish roster, Katenda’s playing time will likely remain sparse for the rest of the season, but if the junior continues to demonstrate the same work ethic and determination that helped him fight through his past injuries, he may be in a position to be a larger contributor next season.

Even if this doesn’t end up being the case, Irish fans shouldn’t fail to appreciate Katenda’s comeback story.

The 2014-15 men’s basketball season has brought success in the form of marquee victories and high national rankings. Regardless of what happens going forward, Notre Dame already has a success story worth celebrating in Eric Katenda.