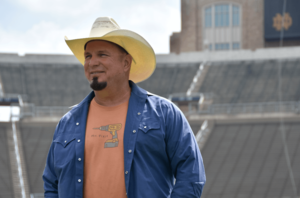 In an unprecedented event, six-time CMA Entertainer of the Year Garth Brooks will perform at Notre Dame on Oct. 20 as the first performer to play a stand-alone concert at Notre Dame Stadium.

At a press conference in August, Brooks made it clear that he was coming to the stadium to compete with both his past record-smashing accomplishments and the legacy of the university.

It was a decision made without Brooks’ involvement, but it thrilled him when he heard he would be playing in the midst of the energy from “the fall, classic, big thing that Notre Dame is known for.”

Brooks concluded his views on the timing of the concert articulately: “You come in here at the right time, at the prime time, when everything is at its fullest and at its best, and you get in there and compete with your history and your future. We’re looking forward to the challenge. If that sounds egotistical, it is.”

Growing up, Brooks knew all about Notre Dame. “Every kid grew up wanting to be green and gold. It’s been a love of mine ever since childhood.” The quarterback of his high school football team, Brooks even had a poster of Joe Montana in his college dorm room. “Everyone loves this college because everybody is a Notre Dame fan.”

Because of his long history admiring Notre Dame, Brooks was in awe the first time he was able to walk on the stadium field: “When you walk on the field, something is there. I don’t know what it is, I wish I could explain it.” The singer detailed how the experience made him even more excited for the upcoming concert. “Whatever it is, it’s going to transfer into the music.”

Brooks explained that when the magic of the Notre Dame Stadium, his award-winning music and the excitement of the audience combine, the only outcome will be “a night that you’ve never had happen before.”

It’s the stadium that excites Brooks the most: “You’re not going to find a more perfect place that’s built for a concert than this place right here.” He explained that stadium’s design will make the concert feel more intimate. “This is all going to be front-row-feel.”

This is especially important to Brooks because of his “every ticket is the same price” policy. As the tickets are about luck of the draw rather than affordability, Brooks always worries about those who are seated in the farthest rows: “You want those people to have as good a show as anybody else. This is the perfect stadium to fix that.”

Brooks went on to discuss the details of the concert, mentioning that the stage will be in-the-round. In this configuration, “It’s just going to be front row everywhere.” While it is great for the audience, Brooks joked that he was “going to have to lose some serious weight and get ready to start moving around a lot.”

Brooks followed up these comments by jokingly reassuring everyone that there would still be a spectacle involved: “Are we going to have all the pyro and everything? Yeah, of course we’re going to have it, because we all want to see that.”

Garth spent his time here in the area during the week of Aug. 27, working for the Carter Work Project by Habitat for Humanity. In fact, Brooks came to the press conference dressed for work. In muddied blue jeans, steel-toed boots and a T-shirt and flannel, the country singer had just come from building houses alongside Jimmy and Rosalynn Carter.

Brooks humbly commented on the work ethic of the couple: “Let me tell you. They are mule drivers! They are a walking example of who you want to be as people.” He went on to say that working with Habitat for Humanity has already made him feel closer to the community of South Bend, saying that the Carters always make the build-site feel like family.

“Start with class, start with family, and that’s what this place is,” Brooks said, noting the connection he felt to the Notre Dame community while working.

Of course, it wouldn’t be a true Notre Dame experience if the concert wasn’t in some way tailored to what makes Notre Dame a university — the students. While Brooks admitted that he couldn’t reveal some of the plans they had in the works, he did disclose that unique Garth at Notre Dame merchandise would be available. The country star also enthusiastically brought up that there would be “scholarships raised from the money generated from that weekend.”

Whatever surprises Brooks has for the night of the concert, one can be sure that it will be an unforgettable experience, setting the precedent for a long- standing tradition of excellent music and performances. Knowing he is the one to start it all, Brooks shared his goal: “Our job is to have someone in 100 years ask ‘What was the best concert at Notre Dame?’ and have someone stand up and speak our name.”